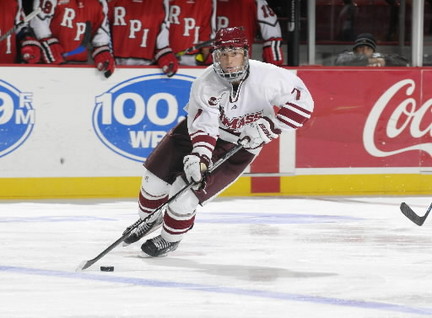 When Chuck Fletcher arrived in Minnesota, he made it clear that one weakness he noticed with the organization was in the free agent college ranks. Today, he has made his first effort to correct that issue. According to Russo, Casey Wellman, of the University of Massachusetts will sign with the Wild for two years (the first being this year), at $900K per year.

The likelihood is that Wellman makes his NHL debut very quickly:

Wellman arrives Tuesday morning and it's unclear as of now if he could potentially make his NHL debut against the Edmonton Oilers. He will be eligible and he IS NOT going to Houston.

From reading Russo's blog, this looks to be a move to shore up the center position, which is an obvious weakness. Not sure if this is a move to put Wellman in the second line center position, or if that would still be an issue to be settled this summer.

Wellman tied for sixth in the nation in scoring with 23 goals this season. His U Mass profile is HERE.

Enjoy this, Wild fans. We have a GM that notices weaknesses and works to correct them. According to the Russo blog (seriously, just go read it) Wellman had interest from 22 teams, and chose the Wild. That, too, is a change.