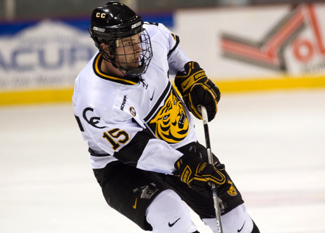 As eluded to earlier in the Walk, the Wild have signed college free agent defenseman Nate Prosser. Russo has it at a pro-rated $810K for one season, that season being the remaining 13 games of this season. He would then need to be re-signed on July 1st, and the Wild would own the rights as an RFA.

Prosser will stay up with the Wild to practice, but will likely not play with the team barring any major injury issues. My bet is a combination of things. First, they wanted the rights to the kid, and this gives them that. Due to what Russo calls a "loophole," Prosser cannot be sent down to Houston this season, so he gets to practice with the Wild until the end of the year. That should give them a pretty good look at how well he can pick up the system, and his work ethic.

Prosser's from Elk River, so he is a Minnesota boy in the system, which will appeal to some of you, not so much to others. The fact that he played for Colorado College should be enough to make all of our stomachs turn. (I kid, I kid.)

You can find his CC profile HERE.

So, two college free agents signed in a week. Almost makes you wonder just what we're in for as teams continue to be knocked out of playoff competition.

MINNESOTA WILD SIGNS D NATE PROSSER
SAINT PAUL/MINNEAPOLIS, Minn. – Minnesota Wild General Manager Chuck Fletcher today announced the National Hockey League (NHL) club has signed defenseman Nate Prosser to an entry level contract for the 2009-10 season.
Prosser, 23 (5/7/86), is a native of Elk River, Minn., and posted 28 points (4-24=28) in 39 games for Colorado College in this, his senior season. He ranked second in the WCHA in defensemen scoring. Prosser had totals of 64 points (12-52=64) in 137 games over four seasons with Colorado College. The 6-foot-2, 210-pound blueliner was a two-time all-conference selection at Elk River High School, where he participated in two state tournaments. Prosser will wear No. 39 with Minnesota.