I received a very disturbing email from a Wild season ticket holder, and would like to get your input:

I'm getting invoiced for $95/seat for Club Sides even though the *PUBLISHED* rate for renewal is $85/seat simply because I'm a new Club STH as of this year.   Not amused at all when  http://myseats.wild.com -> Pricing / Arena Diagram  clearly shows the rate should be $85/seat.

The insulting part is they even calculate out the savings of being a STH, which of course is complete false advertising in my case. I paid for the playoffs option to hold my seat only because I can get that money back in the highly likely chance that we're out of it, but I'm not renewing at $95/seat just based on principle.


If they want to screw me for $10/seat over what they're charging 99% of the rest of club, I'm happy to vote with my wallet and watch more games from the comfort of my couch.

Oh, and here's the proof that this person's tickets are listed at $85/seat, even though they were invoiced at $95/seat. 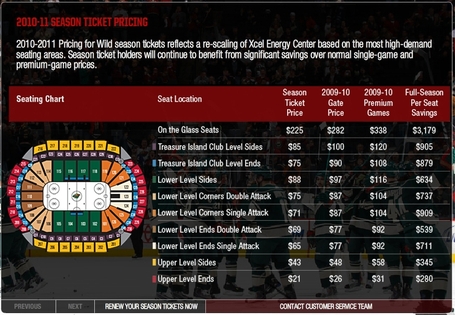 For a franchise that sorely needs the support of the fanbase, especially during a rebuilding process, this is a major black eye. Why are they (seemingly) randomly changing prices on an individual basis?

I've sent requests for comment to the Wild and have yet to hear from them, but I am certainly open to discussing this issue with them.

Here's the response from Billy Rob

Thanks for your inquiry and hopefully this clears up an concerns.

Currently the Wild do NOT offer a contract for season tickets holders. We traditionally send mailed material and an invoice to our season ticket base.

Glad you are a Wild fan!

That's a heck of a non-answer.