How is everyone on this sunny Minnesota morning? I seriously just had to look up who the Wild play tonight. That's either a sign of lack of sleep, a lack of caring, or just plain old being old. None of which would make me happy.

Before we get started, everyone remember about the Tweetup on Friday. It is at Campus Pizza on Washington Ave. REGISTER HERE. I find it hard to believe that only two people are coming, so make sure you register so Nathan knows how many pizzas to buy. I will be there late, but I'll be there. You should show up, too, if for no other reason than to throw things at me.

Random Wild Picture of the Day: 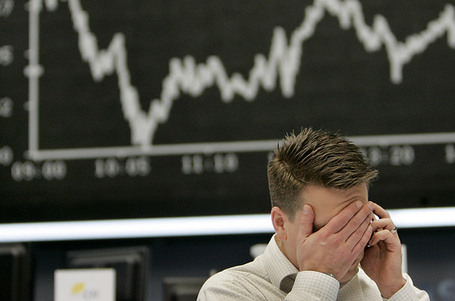 What does this guy have to do with the Wild? Well, you see, after Bruce Brothers said that James Sheppard was starting to pay dividends, he sunk his entire portfolio in Sheppard rookie cards. Then, he read some other opinions on Shep. Thus, the sadness.

Wild is prospecting for gold | StarTribune.com - This is one of those articles that if you don't read it, you're going to be behind the curve.

Rookie Casey Wellman making a strong first impression with Wild - TwinCities.com - Not sure if I learned anything new from this article, but good to see the kid making headlines.

Hitting The Post: In the NHL: Wings take round two; Sens back on track - The new re-cap style looks to be sticking, and I'm OK with that.

Injury bug hampers desperate Flames - Daymond Langkow went back to Calgary, but it doesn't mean he is going to play. He left in a neck brace. Go to the story and check out the picture. Not cool.

Fear The Fin - SBN Sharks blog. I haven't spent much time over there, but the Sharks seem to have some good fans. A shame they don't get much love in their local paper.

See you tonight for the game. Hopefully we'll see you in person on Friday.