The Firing of Frank

Share All sharing options for: The Firing of Frank

It came across the almighty Twitter. "Frank Mazzocco Let Go." Couldn't possibly be true, could it? How on Earth could Frank Mazzocco be fired? I mean, I understand firing He Who Shall No Longer be Named, but Frank?

For those of you in out-state Minnesota, or reading from across the great stretches of the Wilderness, Frank Mazzocco is, I guess was, the play-by-play guy for the Minnesota Golden Gophers. Love or hate the Gophers, you could never fault Frank's call of the game. He, of course, had a perfect voice for doing the job, and his knowledge of not only the Gophers, but of college hockey in general is immense.

Make the jump, or don't. Either way.

Those who read here regularly know we do not delve into the college game altogether too often, as this is a Wild blog. Well, that and to me, college hockey is like sitting through study hall for three hours. I love that they are playing for the love of the game still at that level, but with apologies to college hockey fans everywhere, it's slow. Then, add in the Olympic sized ice sheet the Gophers use, and it makes it like watching paint dry, except that watching paint dry might actually be kind of interesting if you are using color change paint.

Despite the fact that we are not a college hockey blog, it is still a Minnesota hockey story. It is also more than that. The article points to the need to "focus and energize" the broadcasts. They plan to do so by making Anthony LaPanta the new play-by-play announcer. Yes, him. Oh he of the monotone voice and stumbling over every third word.  It shoud certainly energize the broadcast hearing LaPanta attempt to pronounce NIco Sachetti for the next two seasons. 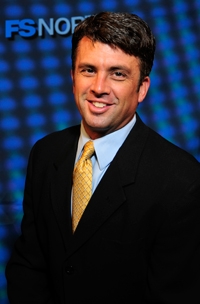 Anthony LaPanta, The Five Hour Energy of FSN. Look at him. You feel energized, don't cha?

Now, I hear you all asking, "Why is this more than a simple story about the replacement of a play-by-play" guy? You see, I have been listening to Frank broadcast Gopher games for as long as I have been listening to hockey broadcasts. He was with the North Stars starting in 1982. He took over Gopher duty in 1986. 27 years people, 27 years this man has been associated with Minnesota hockey. He is a staple of the Twin Cities media scene.

My guess is this has more to do with money than it does with focusing and energizing anything. FSN ratings suck, and the reason is not the broadcast teams. Well... maybe that's the problem for the Wild, but that is a different post. Frank Mazzocco is not the issue with the Gophers broadcasts.

You want to "Focus and energize" the broadcasts? Convince the Gophers to win a few games before they turn into as big a joke as the football team. Anthony LaPanta will do little more than help the audience slip into a comfortable slumber before the first icing call.

FSN has alienated a fringe college hockey fan with this move. Should I decide to tune into a Gopher game next season, the first time I hear LaPanta's voice, I will most likely change my mind.