Well folks, that's 82 games in the bag. A long season has come to an end with the Wild again at home watching the playoffs. I can't say I'm surprised at the final result, but this team has come a long way from the horrible start. They took to Todd Richards' new style by December, and actually played very good hockey in stretches, but simply lacked the offensive talent (and defensive tactics) to get over the hump. The season seemed to go exactly as many predicted. We will have much more season recap and analysis over the next few weeks, so stay tuned.

As far as the final game went, the Wild got out early thanks to Mikko Koivu's two first period goals, but again didn't have the talent (thanks to a huge number of injuries) to keep the Stars at bay, and Brendan Morrow's power play goal plus Steve Ott's 2nd period marker got Dallas back into the game.

The third period started quickly with Casey Wellman crashing to the net and banging home a rebound, just 12 seconds in for his first NHL goal. Unfortunately, Steve Ott notched his second of the game less than 3:00 into the period to tie it at 3. The Wild wouldn't get another great chance again, and the teams headed into overtime then the shootout where Jamie Benn scored the only goal to give Dallas the extra point.

After the game, the Wild team members were tossing pucks into the stands as they announced the three star award for the season to Niklas Backstrom. After that, the game's three stars were announced, and the first star was ... 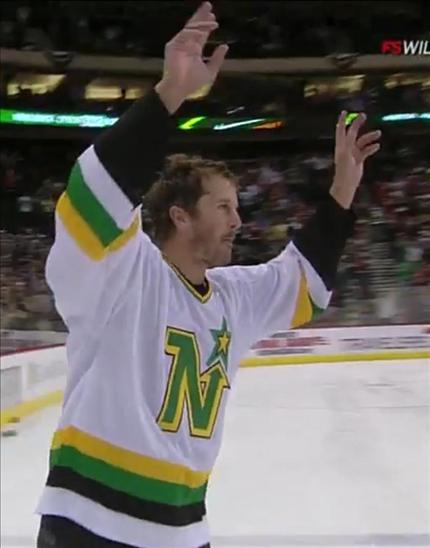 Read our friends over at Defending Big D