Before I start, I apologize for the graphics heavy Walk today. Hopefully it all loads OK. 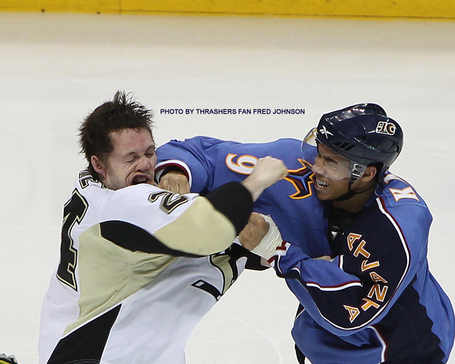 This is Matt Cooke getting knocked out. Literally. If this doesn't bring a little tear to your eye, you are an emotionless hack.

All of this is assigned reading. No excuses.

Wild fixes aren't easy or obvious | StarTribune.com - The first of the post-season pieces coming from Russo.

In 2011, Xcel marks spot for NHL's Entry Draft | StarTribune.com - Russo article about the draft coming to town. Want tickets? You better read this.

Tom Powers: Wild's long list of problems start with the system - TwinCities.com - In the Pioneer Press' version of the Strib opinion article, Powers criticizes the Wild as well.

Hitting The Post: Bruins stamp ticket; Canadiens back in - Rags / Flyers today should be a good one.

Off the Trail, Video Edition:

We all hate the twin brain eaters, but this goal is S.I.C.K. Next up we have the Evander Kane knockout of Matt Cooke. I could watch this all day:

Finally, we have something for all of the people who were hockey fans when the North Stars were around. Enjoy this:

And the video tribute they gave him:

Huge Walk today. Make sure you pace yourself. Later today, I may get angry enough to comment on the opinion guys' articles about the Wild. I'm getting rather tired of the whole "columnist" tag allowing these guys use to hide behind. More later. -Buddha