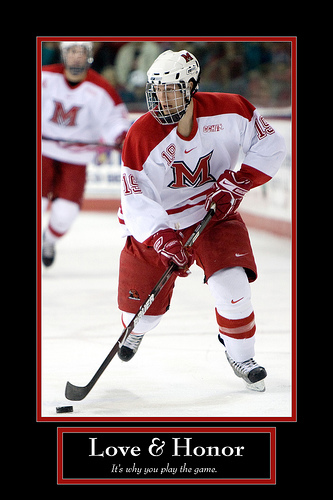 Not sure who made this, or why, but that type of attitude is definitely welcome.

On Saturday, the Wild showed again that they are not afraid to take a gamble. Chuck Fletcher has shown that he is not going to sit back and wait for He Who Shall Remain Nameless' prospects to develop into players they are not. The current regime is stocking the cupboards from whatever shelf they can find. College free agents look to be a serious source of talent, and Fletcher is neck deep in the market.

Make the jump, let's take a look at Palmer, and see what some of the so called experts have to say about him. 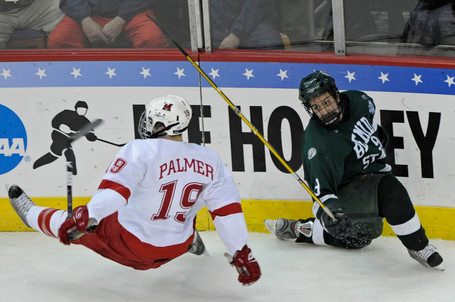 Not only can Palmer play hockey, but he can also levitate.

First off, his basic stats:

Position: Listed only as "Forward"

From his bio on Miami University's webiste:

Has never missed a game during his RedHawk career.

2008-09
Netted eight goals and 19 assists for 27 points... tallied at least one point on 20 occasion... all of his goals came on special teams with seven power-play goals and one shorthanded goal... recorded his only multi-goal game against Bowling Green on Jan. 30... had multiple points in five games, including three on two occasions... dished out three assists against Nebraska-Omaha on Jan. 24... registered a -4 rating for the year... tallied 13 penalties for 34 minutes.

Never missed a game in his college career. Durability. Man, wouldn't that be nice?

From CNati.com, a website dedicated to sports local to the Cincinnati area, is a great piece for those looking to learn a thing or two about Palmer.  A couple of my favorite bits:

That doubt began to creep in while he was playing with the U.S. National Under-18 team, where he only generated 14 points in two seasons.

Then he was not selected in the NHL draft, and his favorite college team growing up, tiny Bemidji State, showed him no interest.

Now almost six years later, the senior forward could be one of the top undrafted free agent pick-ups by an NHL team after his college career ends this spring.

One of the top undrafted free agent pick-ups. Granted, it is a slightly biased source, but those words sound good, so I'm going to just leave them be.

Make sure you read the section under the heading "Obvious Talent."

But much of the talent he displayed then and still demonstrates today is not reflected on the final stats sheet. Palmer is militant when he goes into the boards and rarely loses 1-on-1 battles for the puck there. Often when multiple opponents crash the boards, an outnumbered Palmer either emerges with the puck or finds an open teammate with a pass.

Palmer's penalty killing is exceptional. He harasses any player that holds the puck behind his own net to set up the power play and he is a master at playing keep-away, killing time when he does control the puck on the PK.

Sigh. A guy who wins battles for the puck. Wild fans, if you don't tear up with that info, you just aren't enjoying show business enough.

I'll leave the rest of that article for you to read on your own. Great stuff if you want some background on this kid.

The last link I will give you is this one from College Hockey News. It has a break down of what he did, game-by-game for this past season.

Nathan is obviously excited about this signing as well, judging by his comment on the Walk today. I will admit that I had heard his name mentioned a time or two, but knew little in detail about him. With the excitement surrounding the signing by people in the know about these kinds of things, it is hard to not count this as a quality signing.

He has size, he is described as a durable, healthy guy who wins battles and plays solid defense. He is 24 years old, so he will not need, nor likely be given, years to develop in Houston. He led the #1 team in the country in scoring, and has a .76 point-per-game average coming out of college.

I want to see some excitement from this fan base. The GM is making improvements. Improvements you deserved years ago. Make some noise, people!