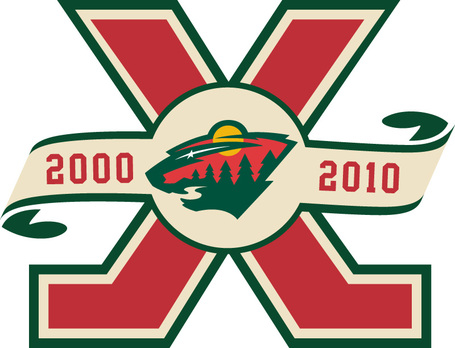 Press release from the team:

MINNESOTA WILD UNVEILS 10TH ANNIVERSARY MARK
COMMEMORATIVE MARK TO BE WORN THROUGHOUT 2010-11 NHL SEASON
SAINT PAUL/MINNEAPOLIS, Minn. – The National Hockey League’s (NHL) Minnesota Wild today announced the team will wear a 10th anniversary commemorative mark on its jerseys during the 2010-11 campaign to help celebrate the club’s 10th season in the NHL. The Wild officially joined the NHL on May 1, 2000.
The Wild’s 10th anniversary mark will be worn on the right chest at all games next season except for the two season-opening contests in Finland, where it will be replaced by the NHL Premiere patch. The mark uses a stylized Roman numeral "X" to represent the ten years of the Wild in Minnesota. The "X" has an added touch of the crossed hockey stick look connecting it back to the State of Hockey. The mark incorporates the team colors of Minnesota Wheat, Iron Range Red and Forest Green and was developed in partnership with SME in New York.
On April 19, the Wild announced it is hosting three voting contests on www.wild.com to help commemorate the team’s first nine seasons in the NHL. The first online voting contest features the Greatest Games in team history and runs through Sunday, May 2. The second contest will feature the Top 10 Moments in franchise history (May 3-16) and the third contest will allow fans an opportunity to select the 10th Anniversary Team (May 17-30).
A detailed list of events and promotions planned for the 2010-11 season to help commemorate the Wild’s 10th season in the NHL will be announced at a later date. The 2010-11 season will culminate with the Minnesota Wild and Xcel Energy Center hosting the 2011 NHL Entry Draft on Friday, June 24 and Saturday, June 25.