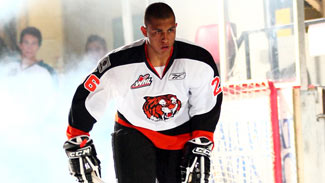 You know us, now meet our friend Circular Theory:

Yes, Hong Kong. The little island 15 flight hours away from the USA. To add to the confusion, I also grew up in Singapore, another small Asian island. One might ask, "Is there even hockey there" and my answer would be "Yes, but the rink in Singapore is half the size of your rinks in North America". I began my hockey lifestyle in Singapore, watching my father play forward in a type of beer league. I would soon learn to love the goalie position, playing non-stop, even till now.

Another question one might ask is, "Why are you a Wild fan?" and the answer is quite simple and primitive, "I loved the color green". But after I started to follow the Wild five years ago, I transformed from being an Asian kid who plays hockey to a diehard Wild fan. I loved the 2003 playoff run that had David defeat Goliath, I loved the defensive style of play, and I loved the underappreciated Minnesotan fan support.

Currently, I am studying in Rhode Island, surrounded by a plethora of Bruins fans. However, I will not succumb and will continue to supporting the Wild. Living in Asia, I have found means to follow every single Wild game and ways to keep track of Wild prospects as they develop and will continue doing so in Bruin land.

I have created my own blog dedicated to the Wild';s prospects, in which I hope to share my burning interest in potential Wild players. My site can be found at http://circulartheory.blogspot.com/ and features my insights in the Wild prospective players. I hope to continue entertaining my fellow Wild fans and look forward to writing up more articles to please the crowd!

Let us know what you think of each pick as we move along. At the end we will open it up to what you think they do with the pick. Make the jump and let's discuss the first player on our list, center Emerson Etem of the Medicine Hat Tigers.

Check out the complete profile of Emerson Etem at NHL.com

Nathan: Wheels. Mad, mad wheels. Proven scorer. Good on special teams, not so much in his own end (which may be an issue with the WHL in general, moreso than an indictment of Etem's defensive prowess). Now, understand that Etem is only 17. He's still 4+ years from the NHL, but that means he'll get time in the WHL, then the AHL to hone his two-way play, but this would be drafting a position of need for the future, not a position of need now. The kid isn't close to ready, but he has decent size already, though another couple of inches would be nice (see: Bjugstad, Nick). He definitely takes being in shape seriously, as he was a physical freak at the combine, so he seems to have a good work ethic. The biggest question is  his playmaking. Do you want a center who thinks of scoring first, or do you move him to the wing? Honestly, I think he's a great selection, but not my number 1, because he's so far out.

Buddha: Etem is one of the fastest players in the draft. His ability to get behind defenders is not a question, however, his ability to get back and cover the defensive zone is. Remind you of anyone? Now imgine that being your center. He had 37 goals and 65 points in 72 games so he is a goal scorer, something the Wild lack. Drafting Etem is a real possibility, and would not be a bad move at all. His development to an NHL threat would not mirror that of Gaborik, as Etem would need more time in Juniors, and then some development in the AHL as well. Soonest he cracks the NHL would be four years, so he is a long term project, not a short term solution.

JS: He led all WHL rookies in goals this year, led his team in powerplay and shorthanded goals, respectable size, great speed, but apparently needs work on his defensive play. Seems to be the kind of explosive scorer the team needs though...

Circular Theory: Minnesota Wild fans are hungry for a goal-scorer, and they may find themselves drafting one in Emerson Etem. Etem led all WHL rookies in goal scoring with 37 goals and was named Rookie of the Year by his Medicine Hat Tigers. He's a dynamic skater with a lethal wrist shot who compliments his play with great work ethic and good hockey sense. While noticed for his awkward skating style, his speed and strength is undeniable. During the NHL Combine, Etem came prepared, tying 3rd in the V02max test, which measures aerobic fitness, and scoring high on leg and body strength tests. Etem still needs to play in the juniors before heading towards the AHL. As history has shown the Wild, rushing a prospect into the pros is not a good idea. IMO, Etem makes the perfect #9 pick as he is the complete offensive package.