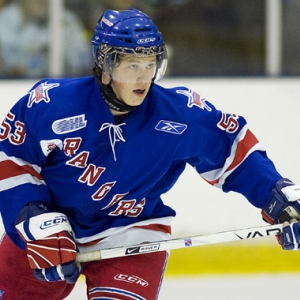 Let us know what you think of each pick as we move along. At the end we will open it up to what you think they do with the pick. Make the jump and let's discuss the next player on our list, center Jeff Skinner from the Kitchener Rangers of the OHL

Here is his NHL.com profile:

Nathan: 50 goals as a 17 year old in the OHL. 20 goals in 20 playoff games. Looking at these numbers, how can he only be ranked the 34th best prospect by the CSB? Oh, you say that he has some issues with his skating? Hmm, that could be a problem once he starts dealing with bigger, stronger defensemen. Clearly the kid knows how to score and with 40 assists, he's a decent playmaker, but if he isn't 6'3", 220, you don't necessarily want to risk a top 10 draft choice on a guy who is a project when it comes to mobility. At his size, he needs to be able to fly, and Skimmer can't do that right now. Now, does it mean he can't do it in the future? No, of course not, but it does mean that he shouldn't be the pick at #9. So, should he fall to the second round (like the CSB predicts), I would grab him there, but he's behind guys like Granlund, Etem, Connolly, Bjugstad, etc.

Buddha: Rated as the 34th best NA skater by Central Scouting, and picked to go 25th by The Hockey News. How this happens when a guy pots 50 goals and 90 points in 64 games in the OHL is difficult to comprehend. While I don't feel he is top 10 draft talent, someone is going to get him late in the first or early in the second, and they will be getting a steal. Criticized for his skating ability, it cost him from being ranked in the top three, but he should be able to pick that up in continued time in juniors, and some time in the AHL. He is not NHL ready, and like Etem, is a long term prospect. As much as I would love to see him in the system, he is not a #9 pick, and unless he falls all the way back to the Wild in the second, I don't it happening.

JS: Jeff Skinner was second in the OHL in goals scored and scored 20 goals in 20 playoff games, adding 13 assists. In short, this guy can score, and a lot of mock drafts have the Wild picking Skinner at #9. He would certainly be a welcome addition because he pretty much answers to all our needs. He participated in the CHL prospects game with team Orr, where he scored a goal and an assist to grab player of the game honors. He would be my personal choice at #9, with next to no glaring weaknesses aside from maybe his size. He has a great work ethic, good faceoff man, very coachable... The total package! I'm crossing my fingers for this guy.

Circular Theory: If Wild fans wanted a goal-scoring forward, Jeffrey Skinner scored 50 goals in the OHL as a 17 year-old and 20 goals and 13 assists in 20 playoff games. Considered one of the top snipers in the draft, his lack of speed and below-average size has kept him from being considered with Taylor Hall and Tyler Seguin. Skinner has a great scoring touch and very good puck handling skills. He will need to spend time in the juniors to work on his defensive game and fill out physically but his puck skills are hard to ignore and will have the Minnesota Wild interested in his offensive game. At #9, Skinner can offer the Wild fans the scorer they hunger for.