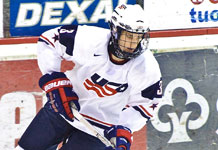 Let us know what you think of each pick as we move along. At the end we will open it up to what you think they do with the pick. Make the jump and let's discuss the next player on our list, defenseman Derek Forbert of the USHL.

Check out his NHL.com profile:

Nathan: A Minnesota-based defenseman over a highly coveted Minnesota-based forward (and a power forward at that?), that's all anyone locally will see should the Wild draft Forbort instead of Nick Bjugstad (let alone anyone else in the draft.

Yeah, Forbort is tall and has a fantastic frame onto which he can add 25 pounds and become a Chris Pronger style d-man. He's raw, incredibly raw, but the tools and framework are there. That said, he isn't a puck-moving blueliner, and if this team drafts a stay-at-home defense prospect, fans will revolt. Seriously.

Buddha: I think if the Wild draft a defenseman with the number nine overall pick that the collective head of the Team of 18,000 will simply explode. The sheer size of the kid has got to make every GM take notice. He's big boy, and has plenty of room to add weight. He can skate, he's a puck mover, honestly there is a whole lot to like about him. Not to mention the fact that he has a kick ass birthday.

Now. A defenseman. Really? To go into the system that has so many defenseman that they are being used as trade pieces? I know it is always pick the best player available, and Forbort has the strong potential to be a very good defenseman. I just cannot see the Wild continuing to use first round picks without trying to address the scoring issues in the organization.

I would not be shocked if they take Forbort, but I cannot vouch for the safety of Chuck Fletcher's mailbox if he decides to take him.

JS: Well hey! Look at that! Another Minnesotan! This guy could be described as a somewhat semi-offensive defenseman, because apparently, he doesn't really like to carry the puck. He's more of a playmaking defenseman, with amazing passes and vision. He also boasts great size, and could turn into quite a beast with some added pounds. He's a smart defender with talent, something that's always a lot of fun to have. In spite of his size, he's not a very physical d-man, but with some extra pounds and practices, I'm sure he can improve on his physical play and become a very scary player to play against. The problem I have with picking him at #9 is that WE NEED OFFENSE, we're already well stacked in D... for now... see with the rumors floating around Schultz and Burns, we may actually draft a d-man early, so it might as well be Forbort. I think some college action or AHL action would do wonders to his game before he makes the jump.

Circular Theory: Many thought the Wild would surely pick a forward in the 2009 draft but ended up disappointed when they select a defenseman in Nick Leddy. The Wild will have the ‘best-player-available' tactic in mind so a player like Derek Forbort will not be totally off the reservation. At 6'5" and 198lbs, Forbort is considered very raw but has all the tools to succeed such as hockey smarts, hard shot, long reach, balance and strength. While not as NHL-ready as Cam Fowler or Brandon Gormley, Forbort has the potential to be the best defenseman in the draft. He will need time at University of North Dakota in which he will be able to learn to put his tools together on a consistent basis and to continue filling out his frame.