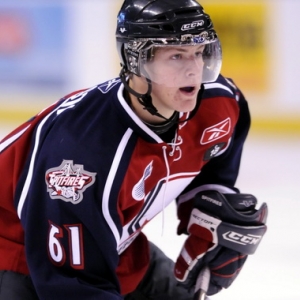 Continuing our look at the upcoming draft, and specifically who the Wild should take, we come to forward Austin Watson from Petersborough of the OHL.

Nathan: I would absolutely love to have a guy like Watson come into the lineup as a right-handed shot down the left wing, but in the second round, not the first. Here's a kid with good size, can still add 20-25 pounds to his frame, isn't a project, has good mobility, can both make plays and finish, but is at least 2-3 years away from the NHL. The question really comes down to how quickly do Fletcher & Company need someone to make a big impact. I'd say pretty quickly, so Watson at #9 would draw major criticism of the scouting department and Fletcher's sense as a GM, which is why I can't see this happening, especially with Watson's injury issues this season. Take him in the second round if he's available, leave him in the OHL for another 2 years (See: Cuma, Tyler and Scandella, Marco) and bring him in to raise hell in 2012.

Buddha: It still amazes me that a guy can be a projected high first round pick, and no one knows what position he plays. Listed by the NHL as a LW, by the Hockey News as a RW, he shoots right handed, which would generally make him a left wing, but everywhere you go, he is a different position. Granted, he could play both, but damn, get on the same page, people.

As for his ability, I have no doubts that he can play the game. His skating is solid, his defensive zone play is solid, his offensive zone play is solid. 54 points in 42 games is not lighting the world on fire in the OHL, but he did suffer a broken ankle that likely slowed him a bit, he was stuck on depth lines, and he was traded during the season, which can also cause an adjustment period. The so called experts are high on this kid. He is still two years away from AHL eligibility, so if he is the pick, it is either a long term pick, or a sure bet. I'd say long term.

I wouldn't doubt the Wild give him a strong look, or consider moving down if he looks to still be available, but again, at the nine spot, I think there will be better options.

JS: Watson was a part of the Windsor Spitfires' rise to glory, with his smart play and speed, but he truly exploded as a member of the Peterborough Petes, where he scored 20 points in 10 games. He was limited to 10 games with the Petes because of an injury suffered at the CHL prospects games while playing for team Cherry. He had helped kill a 5 on 3 PK in that game, indicating that he's very good in both ends of the ice. He was ejected in USA's gold medal game over Canada at the WJC because of a boarding call, indicating that this kid also plays with a lot of intensity, but he has to be careful. That being said, he hasn't been penalized very much during his OHL career, and while his numbers may not stand out when compared to a lot of other young guns, it was mostly because he played in a stacked team with limited ice time. He proved in his time with the Petes that he's the real deal, so much so that his ranking shot up 14 spots after the trade. He's a pretty tall fella, but could probably bulk up and maybe become a good power forward, sort of like a certain Guillaume Latendresse maybe? Well, he may be more of a playmaker than a sniper, but this kid's going to be very good two-way player in the league, and I don't think the Wild could go wrong with this guy. I think another 2 years of playing top line minutes and bulking up would make him a wonderful player in the NHL.

Circular Theory: While considered a reach at #9, Austin Watson is an intriguing prospect. Watson is known for his versatile two-way game, blocking shots and playing the penalty kill, but he exploded offensively when he was traded to the Petes where he scored 20 points in just 10 games. He is a power forward that can protect the puck and plays a fearless, energetic game. He also uses his stick effectively, boasting a solid shot and creating scoring changes with close-to-the-net opportunities. Watson will have to spend time in the juniors, adding more weight to his frame and polishing his offensive skills. I would rather have the Wild draft other talented forwards but if the Wild scouts seem to think his latest outburst of offense as sign of things to come, I would not be totally shocked by the selection.