Ladies and Gentlemen, We Regret to Inform You...

Share All sharing options for: Ladies and Gentlemen, We Regret to Inform You...

I can't do it. I can't be the bearer of this news. I am going to need to find someone to help me out here. Meet me after the jump. 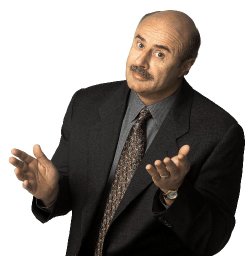 Dr. Phil is here to comfort all of you in this very difficult time. Dr. Phil? Please, go ahead.

Well, folks, you had to know this day was coming. I mean, if you didn't you were were fooling yourself into thinking the world is a beautiful place with marshmallow gumdrop kisses. It's not. Life is a festering stinkhole of puss and laundry soap. The Wild re-signed James Sheppard. $803K per year, per Russo. Get over yourselves and get back to work.

Thanks Dr. Phil. I couldn't do it. I needed someone with absolutely no soul to convey that message for me.

Now that we have the bad news out of the way, I would like to remind you all that if you work very hard, keep your nose to the grind stone, out perform everyone of your peers for the remainder of your working career, you are unlikely to make much more than James Sheppard will next year for sucking at what he does for a living. As Dr. Phil said above: Life is a festering stinkhole filled with puss and laundry soap.

Oh, by the way, there is more from Russo, who had a sit down with Fletch about this signing. Some highlights:

What do you expect from him?

Just to get better. I’m looking for James to come back with more urgency and to make a bigger investment in his career. To me, it’s not about the numbers. I mean, it’s always about the numbers, but I don’t want his focus to be the numbers. I want him to come back and have a strong summer and a good camp and come in and earn a spot on our team and play the right way every night. And if he does that, he’ll get rewarded. He’s still a young player, he’s still maturing. There’s no question he lost his confidence last season, but from our standpoint, we know he can play in the league. Whether he becomes a good hockey player in this league will be up to him. We need size, we need young forwards, we need centermen, and he’s all of the above if he can put the time and effort in to take the next step in his career.

As I said over on SBN Minnesota: In other words, suck less.

And the key line of the entire post, as far as I'm concerned?

So from our standpoint, it makes perfect sense to give him every opportunity in camp.

In camp. Russo cues in on this a bit in his post, but if the words "in camp" don't ring like a gong in Shep's head, nothing will ever get through to him. It doesn't take much to read between the lines on that one. You best be working your tail off, son, or you will find yourself on the short end of the waiver wire real quick.

So, there it is. James Sheppard is back. I'm sorry Wild fans. I don't know what else to say, so I'll leave it to the one and only Nathan. Nate, take it away: