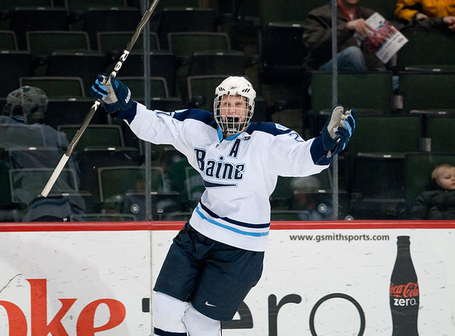 Continuing our march to the 25th, we here at Hockey Wilderness continue to look at who might be available and who the Wild could, would, and should take with that selection. Today we look at Mr. Hockey himself, Nick Bjugstad.

Who do you think the Wild should take? Anyone you really feel that Nathan, Buddha, JS and special guest Circular Theory should look at? Let us know in the comments.

Nathan: There's a big-time forward prospect from Minnesota who will likely be available for the Wild to take in the first round you say? The Wild call Minnesota the State of Hockey, you say? Interesting.

We all know the reaction of Wild fans when Chuck Fletcher passed on the quickly falling Jordan Schroeder and instead picked 2009 Mr. Hockey, Nick Leddy (nevermind Schroeder's WJC success or the impact he had on the Manitoba Moose once he left the U, not to mention Leddy being shipped to Chicago for Cam Barker). Will the same reaction come should the Wild pass on Bjugstad and instead draft Derek Forbort? How about if they pass on Bjugstad and instead take Jeff Skinner, Mikael Granlund, Ryan Johansen or someone else? I imagine that the provincial Minnesota hockey fan will be upset that the Wild again failed to grab the best prospect from Minnesota, but should they be?

Bjugstad is a freak. I've seen him play 15-20 times over the past two seasons, and you always notice him on the ice. He is a man amongst boys, even though he accelerated his studies to graduate a year early and head to the U of M (all comments re: Lucia and the failure to develop prospects aside). He has the build to be a prototypical power forward with excellent hands and vision. Can both make plays around the net and pick up the garbage as well as drive to the net to create his own play and finish when others set him up. He was fantastic at the combine, showing speed, strength and agility. The biggest drawback for Bjugstad is that he is at least 3-4 years away from the NHL. He'll be at the U for at least 2 seasons, then will need a year in the AHL to get up to professional speed. Would I take him at #9? Yes, but only if certain other guys were gone. He'll never last to the second round, and likely won't make it past St. Louis at 14 or Boston at 15.

Buddha: As I have said in other mock drafts I have participated in, Bjugstad is certainly a tempting pick for the Wild. For provincial Minnesota hockey fans, there is no other pick. The lunatic fringe will tell you that Bjugstad is the best thing to come out of Minnesota since Neal Broten. I disagree, but still would not be upset with his selection at nine. Do I think they take him? Not a chance.

As I stated in my piece for ProHockeyNews, there are reports of the Wild having issues with the University of Minnesota's program (reports which the Wild deny), and that is exactly where Bjugstad is headed for the next two years, minimum. He is big, of that there is no doubt. Plenty of room for growth, ability to play multiple positions, and yet somehow was completely invisible in the MN High School Hockey tournament. A first round NHL draftee would be able to walk all over the kids he played against, and yet he was shut down. That certainly raises questions.

He rocked the NHL combine, scoring highly in many different categories, comes from a high class high school (OK, it's a dump, but the hockey program is pretty good), and he will certainly go in the first round. I am sticking to my original assertion that he goes mid first round, around 15 or 16. Nothing against the kid, I just think there are better options.

JS: A lot of Wild fans would like the Wild to draft him, mostly because he's the hometown stud, but realistically, the Wild will need to pick the best player possible at #9, and I don't believe it will be Bjugstad. Don't get me wrong, this guy's very talented, but I wouldn't put him in the same circle as most of the projected top 20 for some reason. NHL.com compared his style to Andrew Brunette's and while I love Bruno, I don't really think that's what the Wild should be shooting for at #9. Rumor has it that CF's trying to trade for another spot in the first round (hopefully while keeping #9), and call me crazy, but I wouldn't be surprised if he was trying to get Bjugstad with that pick, and if that's what happen, I will say "SWEET!", but not with #9. He had a very dominant season (60 points in 25 games, Mr. Hockey award), he has great size, he's pretty high up in the rankings, he can play all forward positions, which would make him very useful. I'm sure the guy will become a pretty good hockey player in the NHL, but I think he may be far off, like maybe 3-4 years. If we do draft him at #9, I really hope we don't rush him, because I will still be happy to get him.

Circular Theory: Don't worry Minnesota Wild fans, we have the Minnesotan right here. Now how much emphasis does Fletcher put on 'home-grown' talent? Last year, the Wild picked the Mr.Hockey Award winner Nick Leddy yet he was quickly traded for Cam Barker. Obviously, Minnesota has had a bad track record with Minnesotans (Thelen, Leddy, Irmen, Hickey) but Bjugstad offers such an interesting package, the Wild might be forced to draft him. Standing at 6'5" and 190lbs, Bjugstad displays an NHL ready-body with more room to grow. He also has a very intriguing complete package consisting of speed, shot, size, skill and character. One big concern that many have is that he will be heading to the Minnesota Gophers, who in the past few years, have had a shaky developmental system, in which Bjugstad will need to spend at least two years filling out his large frame and developing his game. With the Wild's poor track record, I'm a bit uncomfortable selecting a Minnesotan just because he's from Minnesota, but after looking at what he has to offer, it would be hard to argue against the selection.