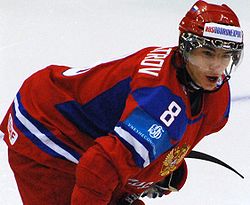 Don't let the picture fool you. Just because he is a Russian wearing #8 means nothing.

Continuing our look at the upcoming NHL draft, and who the Wild would, could, and should take, we find ourselves just eight days from the first round. The pressure builds, the focus remains tight. Today, we take a look at a Russian phenom, Alexander Burmistrov.

Nathan: No chance this kid is around come #9. However, if he wouldn't have come over to the OHL, he would've been. Funny how the NHL teams love the guys who "play by their rules". Anyway, the kid has skill, but he's just so, so skinny. You watch him and try to figure how how he doesn't get destroyed trying to drive to the slot. But, like Marian Gaborik, he is electrifying. Some say he's not fast enough, shot isn't good enough, he isn't tough enough. Others disagree. How about the fact that he's a Russian? Well, since he came over to juniors, I can't imagine the KHL is too big a concern. Either way, there are better selections here.

Buddha: Not sure this kid could get any skinner if he tried. Some list him at 6', but none ever up his weight. 157 lbs? Eat a cheeseburger, man. Hell, eat a couple.

65 points in 62 OHL games, and 4 points in 6 games in the WJC is not overly impressive. Couple that with the ever growing fear of drafting Russian players due to no transfer agreement with Europe or the KHL, and this just adds up to a rotten. I can just see the conversation: "Who should we draft at 9?" "How about the scrawny little Russian kid who has an equal chance of going to Russia as he does the NHL." "Yep, that's what I was thinking."

No way. The Hockey News has him going 6th. I would be fine with that. If Tampa wants to draft my oldest daughter to be their center of the future, so be it, but the Wild don;t need the risk. Despite the experts being high on his compete level,  I am 100% pass on this kid.

JS: Speedy, gritty and magnificent hands, Burmistrov is likely the best Russian in this draft (That's right Kabanov!), but make no mistake, he plays the North American game. He's an able penalty killer, can block shots, and likes to throw what little weight he has around. That's right, he's rather small, so he absolutely needs to bulk up if he wants his shot in the NHL, because he may have trouble on talent alone, but then again, it has been done, but only truly remarkable players are both very small and NHL stars at the same time. We all know however, that when a Russian star is good, he tends to be VERY good, so hey, I think Burmistrov, unlike many other Russians, wouldn't be a risky pick, because he clearly wants to play in the NHL, and the Wild would profit from an exciting player like him! All he needs is to build up his frame a little bit, but no use rushing him. A year in the AHL at the very least.

Circular Theory: Comparisons to Pavel Datsyuk and Alexei Kovalev have fans scrambling to find info on Alexander Burmistrov. Burmistrov is seen as a two-way forward with the exceptional ability to create offense with his quick feet, great offensive instincts and superb stickhandling. He also has high hockey IQ and is strong on the puck. Questions have inevitably come up due to his Russian background but since Burmistrov has already started to play in Canada, the "Russian Factor" might not play such a big part as one might expect. Like most of the prospects available at #9, Burmistrov will need time in the juniors and minor pro to develop his consistency and to fill out his frame. I may be biased against Russians but after years of disappointing Wild picks, I would rather pick someone that doesn't have that Russian background. Don't flirt with danger!