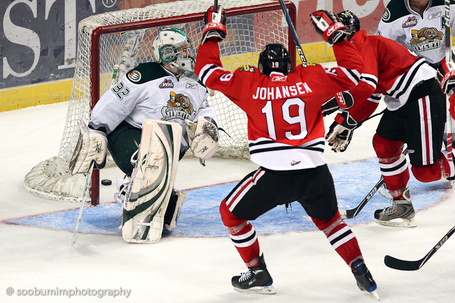 We've almost completed our stroll through the prospects who may be available with the ninth pick. While we have settled on Mikael Granlund as our pick, we would be remiss to not cover everyone we think may be there at nine... just in case.

Today, we look at Ryan Johansen, center from Portland of the WHL.

Nathan: Ryan Johansen will almost certainly be available for the Wild at 9. While his stock has been rising in the last few months, I can't imagine he will jump much higher than 10. Growing 5 inches and adding 40 pounds helped Johansen jump from 5 goals, 12 assists in 47 games with Penticton of the BCHL (Junior A) to 25 goals and 44 assists in 71 games with Portland of the WHL. That is a dramatic jump, which launched him to the upper-first round. Make no mistake though, he's not a grinder at all, he's a finesse center with some size. He has fantastic touch, especially down low where he can use his size (though he's clearly still getting used to it), Johansen is a playmaker, who idolizes Joe Thornton. Frankly, not a bad model for a kid with decent size who wants to make his linemates better. He'll need some seasoning in juniors, then the AHL. Definitely a project, especially with mobility, but he certainly has promise. For the Wild to take him, Granlund, Skinner, Niederreiter, Etem and Burmistov should all be off the board.

Buddha: It always boggles my mind when I read one post calling a kid "big" and then another calling him "skinny." He is 6' 2", 192lbs. That is not a small person. While he certainly could add some bulk, he is most definitely not small. CSB has him as the tenth best NA skater, The Hockey News has him going 12, and most mocks have him anywhere from 12-16. Yes, some place him in the top 10, but not many.

69 points in 71 games in his rookies campaign in the WHL shows the kid has some scoring touch. He still has at least two junior seasons left before he lands in the AHL for development. Questions about his compete level away from the puck are going to make him drop past the top ten. I think Johansen may be the kid that everyone passes on, and no one really knows why. My guess is he goes in the late first round. The Wild have better options at 9.

JS: Good sized player, especially if he bulks up. Good vision, but inconsistent. Rapidly climbed up the rankings, which means he grew very quickly as a top flight player.

Circular Theory: One of the fastest risers in the draft, Johansen has some wondering whether he can continue his impressive performance. Known mainly as a playmaker, Johansen has the ability to beat players one-on-one. He boasts impressive on-ice vision as well as the ability to forecheck effectively. He will need time in the juniors to develop his consistency and fill out his frame so it'll be awhile before he hits the pros. While Wild fans would rather draft a goal-scoring forward, adding any offensive forward will be a welcomed addition.