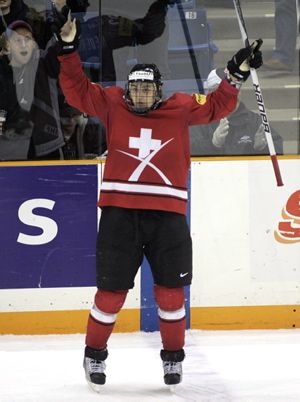 He looks good in red, right?

Are we there yet? Could it be possible that this is all a cruel joke and the draft is tomorrow? Even though we all know that the Wild's first round pick is not going to be in a Wild sweater next season, the excitement and anticipation is killing us here at Hockey Wilderness.

Who will it be? Will it be Nino Niederreiter? Could it possibly be, if only so Russo has to type Niederreiter on deadline at some point?

Here is our look at Niederreiter, a LW from Portland of the WHL.

Make the jump and discuss with us if Niederreiter is the right choice.

Nathan: I don't think I've yet seen a mock draft where El Nino (get it? Ha! /sarcasm) falls down to #9. For a Central Scouting Board final ranking of 12 among North American skaters, it's a bit of a surprise, until you see his size and watch YouTube highlights. Sure, he may need another year in juniors, but with that size, and another year in juniors, he may well fight for a spot on an NHL roster as a 19 year old.

Director of NHL Central Scouting, E.J. McGuire
"Plays in Portland but showed the world how good he could be in the (World Junior Championship) playing for the Swiss National Team. And after that tournament he kept getting better. He's shifty, he's skilled, he has a good stride and he loves battling in the corner."

Portland Winterhawks head coach and GM Mike Johnston
"Nino is a combination of a power forward and scorer. He’s a guy who can play a very physical, very involved game. He has touch around the net, he has great instincts on where to be around the net and when he gets the puck on his stick he usually creates scoring chances or a goal. He’s a player who, personality-wise, is a great teammate, a real key focal point for the group. And he’s becoming a better two-way player."

Shifty. physical, led his team in goals, got better throughout the year, improving two-way play. Sounds like the kind of guy who has NHL scouts salivating, that's why he'll never fall to 9, and if he does, you run to the podium, thank the people of Los Angeles for their hospitality and ink the kid.

Oh, and check this out

Buddha: This is a good pick. Problem is, I don't think he makes it this far. Despite CSB having him as the 12th rated NA skater, The Hockey News has him going 8th, and most drafts have him gone before the Wild select. If wishing were able to make it so, this would be the Wild's pick. 60 points in 65 WHL games including 36 goals, added to 10 points on 6 goals in the WJC... this kid can score. He has some size, and could still add some bulk. There are few questions about his game, and no one seems to think he falls to nine, except CSS. So, who knows. He is in the group of players that still need some junior time, and likely a year or two in the AHL.

If he is available at nine, the Wild will not pass on him. But don't bet your house on that being the case.

JS: Ever since the World Junior Championship, where Niederreiter played absolutely brilliant hockey for the Swiss and showed his ability to be a clutch player, his stock shot up. A rare Swiss star forward in the making (because most of the good Swiss players are d-men and goalies). He's got good size and grit, he's passionate and has everything needed to become a power forward and succeed in the NHL. Can also play good hockey in his own end. Nickname: El Niño. Is likely to become the highest drafted Swiss ever (the highest right now is Michael Riesen, 14th overall in 1997) and will also probably become the best ever Swiss player in a couple of years. Had he been born a week later, he wouldn't have been eligible for this year's draft. Given his age, he would likely need 2 years of development in juniors or minors. He'll be a pretty exciting player, that's for sure.

Circular Theory: I don't mentioned this prospect too often, mostly because I'm quite confident he will be gone before #9. I like to show love to prospects that have the tools to become a good NHLer, raw or safe. "El Nino" is one of those prospects, possessing size, speed, skill and two-way play. His offensive skills are quite impressive, boasting hockey smarts and a good shot while he play in the defensive zone is equally as impressive. At #9, I would be furious if the Wild passed on Niederreiter as I believe he is just that good.