Share All sharing options for: Wilderness Walk for 6-26-2010: Remembering the 1st Round

Hey all, you awake yet? You should be. No partying in LA for you, we have business to attend to. Obviously, the first round was yesterday, and the Wild selected exactly who we here at Hockey Wilderness told you they were going to draft. We also gave you our picks for round two, but those look to be in jeopardy as several should-have-been-first-rounders are still on the board.

Before we move on to the second round, I thought we should re-cap the first round in terms of things that are important to us, and look at what others are saying. Make the jump, take a walk.

First, a look at the first round, other than the fact the Granlund was selected by the Wild.

Being that this is a Minnesota hockey blog, we would be remiss if we did not inform you that four Minnesotans were taken in the first round. Four. Out of 30 picks, four of them came out of good ol' Minnesota. For provincial Minnesota fans, this is a blessing and a curse. Since the Wild did not select any of them, they will immediately all be the next Lidtrom, Gretzky, or Lemieux, and the Wild didn't take them, so Chuck Fletcher is immediately an idiot, right?

Wrong. While it is much too early to know if any of the Minnesotans taken will be super stars, keep in mind that the Wild had no need for more defensive prospects, and they were not high on Bjugstad, so that's why they did not take them. It's not because Fletcher hates Minnesota, it's because Blake Wheeler is not the savior, and neither is Bjugstad. Get over yourselves and realize that drafting a kid just because he is from Minnesota is ridiculous.

That said, four Minnesotans were taken. Pretty impressive. Derek Forbert, Nick Bjugstad, Jared Tinordi, and Brock Nelson. Congrats to all four of you, and I can't wait to watch you get your butts handed to you by the Wild in a few years.

Articles on this topic:

From state of hockey to cradle of D-men | StarTribune.com - Russo looks at the State of Hockey and it's first round.

Four Minnesotans selected in record-tying first round of NHL draft - TwinCities.com - I didn't figure the Pioneer Press knew the draft was going on. I was wrong. Whoops. Simple mistake to make though.

Back to Granlund for a minute, and back to those provincial Wild fans I love so much. Also, for those who think the Wild should have taken Fowler or Gormley. Granlund was picked by many experts as the third best player in the draft. He was the top rated European. He comes into an organization with a healthy track record when it comes to moving Finnish prospects through the system. He is an elite level centerman who can also play wing. Yes, he fills a "need," but he was also the best player available. Keep in mind that the top two defensemen were also passed on by 10 other teams, not just the Wild.

Wild finds its middle man | StarTribune.com - Russo gives it to us straight.

Good pick, Fletch. Don't worry about all the other crap. Good pick.

Moving off the trail, just a bit, the first round brought out a couple other articles I wanted to share with you. The first is a continuation of a post we did a bit ago, and something I did not know when the kid's name was called:

Schwartz carries heavy heart into NHL draft  - Jaden Schwartz is the brother of Mandi Schwartz. Yes, that Mandi. I cannot imagine last night for this kid. The joy, mixed with excitement, tempered by unknown levels of fear for the health of his sister. In what I think is truly classy, rather than speak about himself, he took the opportunity to talk about his sister when interviewed by the press. Good on ya, kid. If this story doesn't get to you, I don't think you have a soul.

Finally, I will leave you with some humor.

Tom Powers: Minnesota Wild could use a big trade - TwinCities.com- Normally, I would tear this article apart, but today, I just offer a couple of remarks, as we stay focused on the task at hand. First... Tom... welcome to 2006. You just now figured out the team is mediocre? That things need to get worse before they get better? Really?

Next issue. You state that the kid the Wild drafted is not going to be of immediate help. Was there someone on the board at nine that you think was the missing piece to bringing the Cup down Kellogg Blvd? Because there wasn't, just so you know.

This is the type of article you get when a guy is told to write about hockey who doesn't care about hockey, doesn't watch hockey, and doesn't write about it regularly. Of course, the guy who writes for them on a regular basis doesn't seem to care much either, so they have that going for them, at least they are consistent. Columnists irritate me, especially when they write to the lowest common denominator.

Oh, and then there was this: 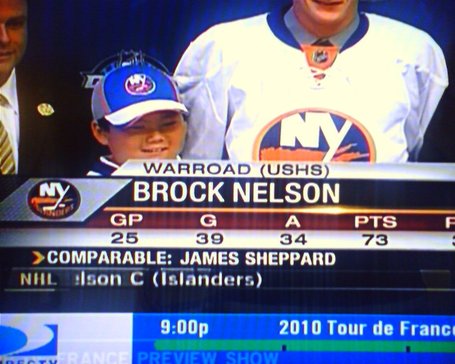 Enjoy the day folks. The second round starts at 12 central, on the NHL network.