ECHL deals are of minor consequence, especially since the Aeros generally loan players to ECHL teams near Houston, such as the Florida Everblades. The affiliation with the Chiefs resulted in exactly zero prospects being sent to Johnstown.

You can find all of your Condors gear on their site as well. Make sure you order two, and send one to me. Thanks.

The Condors are so excited to announce this deal, they have posted this picture before entering their website: 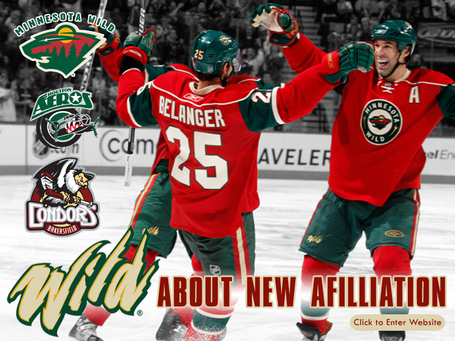 Minnesota Wild ANNOUNCES ECHL AFFILiATION WITH BAKERSFIELD CONDORS DURING 2010-11 SEASON
BAKERSFIELD Calif. - The Bakersfield Condors, host of the 2010-11 ECHL All-Star Classic, today announced they will serve as the official ECHL affiliate of the National Hockey League’s (NHL) Minnesota Wild. The announcement was made today by Condors President Matthew Riley and Wild Assistant to the General Manager/Houston Aeros General Manager Jim Mill in front of media, season ticket holders and corporate partners.
“The Minnesota Wild and Houston Aeros are excited to partner with the Bakersfield Condors for the 2010-11 season,” said Mill. “Bakersfield has enjoyed a tremendous amount of success in their 12 seasons of hockey.”
The agreement is anticipated to bring several prospects to Bakersfield to continue their development. Since 2001, the American Hockey League affiliate for Minnesota is the Houston Aeros, also owned and operated by Wild ownership group Minnesota Sports & Entertainment.
The Wild become just the second NHL affiliate in Condors history. In the past two seasons, 22 players have moved up from the Condors to the American or National Hockey Leagues, and in 2009-10, five Condors suited up in both Bakersfield and the NHL, all with Anaheim, last season’s Condors affiliate.
“We’re pretty excited to be associated with a strong organization like the Wild,” said Riley. “It’s a great tie-in for the State of Hockey to work alongside Condorstown to prepare their prospects for the next level. We’re looking forward to a great partnership.”