Share All sharing options for: Fraud Charges Against Fundraiser for Mandi Schwartz 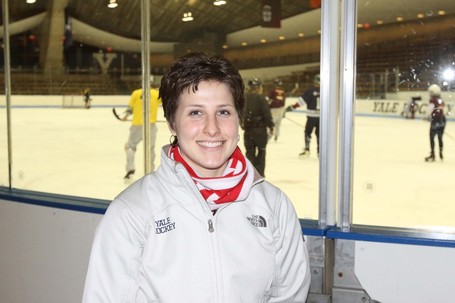 "What I do is so, this world will know, that it will not change me." - Garth Brooks, The Change.

If you remember, and I am sure you do, I wrote a couple months ago about Mandi Schwartz, a Yale University hockey player in desperate need of a bone marrow transplant. I told the story, I asked for your help, and at least a handful of you responded. Why did you respond? Because you are good, loving people who want to help as desperately as the help is needed. You did so because your head and your heart told you it was the right thing to do. My guess is that even though I offered some "prizes" for helping, you helped without expectation, without a desire for personal gain.

Some involved in this fight made decisions to do otherwise. Make the jump for more information.

It has made it's way around the internet, and I am slow to the story. With apologies, I offer the explanation that it is not always best to write when angry. The New York Times reported on July 27th that the main fundraiser for Mandi's cause has been accused of fraud. Fraud in fund-raising for Mandi, and on multiple occasions in the past. The man's name is Tedd Collins, IV. Hereafter he can simply be referred to in his names he has used throughout history: Lucifer, Beelzebub, or Norm Green.

That last bit was an attempt at humor. To lighten the mood in a very dark, very sad point in human history.

You see, Collins not only has taken money from Mandi's cause, he has taken it from other groups desperate to help those who need it the most:

¶Collins, his wife and an associate were sued in South Carolina state court last year by a pastor who said she invested $100,000 with him and never saw her money again.

¶He was linked to the 2005 collapse of the Bayou Group hedge fund, whose founder faked his suicide two years ago in an ultimately unsuccessful attempt to avoid prison time.

¶A bank account controlled by Collins in Kentucky was also described in the affidavit as having been used in an attempt to deposit $22 million in counterfeit checks — which Collins said were from a client — in what was called a "major" fraud attempt.

¶In California, an octogenarian couple sued Collins and a group of associates in 2007 after they were said to have falsified documents to transfer title to the couple’s home and obtain mortgage loans. A default judgment was entered against Collins in 2008.

Pretty bad, right? Right. This story cannot possibly get any worse, right? Wrong. You see Collins' own daughter died in the summer of 2008 from the same disease that is slowly killing Mandi. In an interview with ABC, Collins said that his daughter:

"She just looked at me and said, ‘One day, Dad, you can’t, maybe you can’t help me, but hopefully you can help other people.’She then told me about Mandi."

On her death bed, this man's daughter begged him to help her. Put yourself in his shoes for just a moment. I know you don't want to, but do it. Just that moment. Your daughter, dying, looks into your eyes and asks you to do one thing. Help Mandi. Anyone worth a damn is going to commit the rest of their life to one mission. Helping Mandi. Mr. Collins did the same, except in the process decided it was better for him to collect money using Mandi's name, and do... well... we don't really know what he did with it.

Of the $11,000 raised thus far by Collins, none of it is accounted for. The man hired by Collins to accept the donations on behalf of the organization, Pastor Todd Foster, said this of the money:

"Everything that has come in has gone right back to him. We entrusted him to do what he has purported to do."

Before I get to my feelings on the matter, I want it to be clear that the Schwartz family did not know about Collins' past, and did not ask him to do fundraiser work for Mandi. In the article, Mandi's father said this:

"From our end, he’s worked tirelessly in finding cord blood for Mandi, and that was his main cause."

Let me be perfectly clear in this. The Schwartz family is not involved in any kind of fraud. Mandi is truly sick, she could very truly die, and she honestly needs help. No one in this situation is being accused of anything except Mr. Collins. Point your rage at him. He is the one who deserves it.

Mr. Collins is what I like to refer to as "a waste of flesh." He is the type of person who finds joy in the agony of others, and finds ways to exploit the system in times of tragedy. This "person" id the same ilk as those who passed off fraudulent insurance claims after 9-11, who find a purse lying next to a beaten women and rather than call for help, rifle through the purse looking for cash. He does not deserve to breathe the same air as the rest of humanity, let alone Mandi Schwartz. Mr. Collins is a parasite, no better than a tick or a tape worm. He lives off of sadness and misery, finds solace in the fact that in the world as we know there will always be a solid supply of tragedy, and a steady stream of money from those who want to do good.

Do not let this man, and those like him,  change who you are. Do not allow parasites such as Mr. Collins to belittle the good works that you may wish to do. Do not give up on the idea that you can save a life, because you can.

If you wanted to help before, you can still help now. There really is no need, at least at this point, for a monetary donation. That's how you can help. Not money, which as we have seen can be stolen, but in a donation of life, something that cannot be taken. It is as easy as ever. Go to Be The Match and sign up. Order your test kit, swab your cheek, and become a member of the bone marrow registry. You can't punch this guy in the face, and you can't shoot him. Instead, make him unnecessary. Kill that which he believes in. Do something good that evil people cannot taint.

We now return to our regularly scheduled snark and Ilya Kovalchuk watch.