Josh Harding Out for the Season - Now What?

Share All sharing options for: Josh Harding Out for the Season - Now What?

With the news from Russo confirmed by the Wild, it is now time to explore where the Wild go from here. First, let's all just stop and take a big, deep breath. While the loss of Harding is a huge blow to both his career and to the team, and no one would say otherwise, the team can (and will) continue to play the game.

As for what exactly happened, and what happens next, make the jump, and let's discuss.

First, let's define what is going on. Harding has torn both his anterior and medial collateral ligaments. The purpose of these ligaments is to stabilize the knee joint. Tearing one is bad. Tearing both is potentially career ending. According to WebMD and other sites, the recovery time for either tear is somewhere between two and four months, in a best case scenario. Some patients take much, much longer, and some never fully recover. Given that Harding will have access to the best surgeons in the world, has nothing to hold back his full time recovery effort, and has a career to defend from this injury, you can bet his recovery would have been on the low end of that scale.

However, with both ligaments torn, it changes the equation. From what I can gather, it is more like nine months in the best case. And, as this story continues to develop, Russo is reporting that they will not even do surgery until the MCL heals a bit, meaning the timetable on this recovery gets pushed back until that actually happens.

Here is a picture of the knee to give you all a bit of perspective: 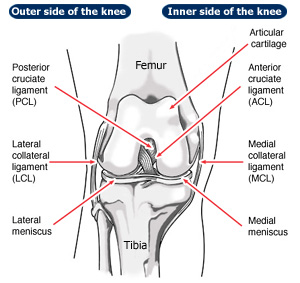 With Harding being out for the season, the question immediately becomes: What now? For the answer to that question, we need go no further than what would have been the plan had Harding been traded. The understanding on the goalie depth chart was this:

Since a trade would have removed Harding from the chart completely, it is no different (depth wise) than him being injured. The depth chart simply moves up one notch, and the team continues to play the game.

Kevin Weekes, former NHL goalie, and contributor on Hockey Night in Canada and the NHL Network had this question via Twitter:

Do the Minnesota Wild make a call to Jose Theodore ?! Harding injured for extended period of time,Backstrom's had some surgeries as well...

The immediate answer is, of course, no. While Theodore is certainly an option, it makes no sense to go into a panic mode when Khudobin has shown nothing but solid play. Granted, Weekes makes a solid point that if Borat can't shoulder the load, Theordore is certainly a viable option. Hackett is far from NHL ready, and we all know what happens when a player is rushed through their development. Todjman is a solid AHL goalie, but has as much NHL experience as Khudobin does.

Certainly, the situation is not made easier by Harding's injury. Hockey Wilderness wishes nothing but the best for him, and we will follow his recovery battle and hope that he finds a NHL home come July 1. Right now, however, the focus on what the Wild do should not stray far from Khudobin and his abilities to perform as Backstrom's back-up.

Let's have it Wilderness. Are the Wild equipped to weather the storm? Should we just pack up the sticks and go home? Can Harding battle back? Share your thoughts below.