Share All sharing options for: NHL Guardians Update: We're Out

Back in December, Hockey Wilderness asked the opinion of our readers. We love to know what you are thinking, and we had no idea how you would respond to the NHL Guardians Project and everything that came with it. We had trepidations about the entire concept, but we wanted to remain open minded. We asked if you would be interested in a contest to promote the idea, and you answered yes.

Well, we were wrong. Very, very wrong. Mark it down on the calendar, because I have admitted I was wrong twice in one day. The NHL Guardians project is a train wreck. Make the jump for more.

First, let's get this out of the way. The Wild themed character was released yesterday. Prepare yourself. This may be the worst 31 seconds of your life.

If you think this character release is bad, you need to check out the main site for the release of all of the characters.

The release of each character is being done through a voting process on their Facebook page. Each day, a winner is chosen, and a character revealed. The first character to be revealed was "The Penguin." If you were ever a child, or watched a X-men movie, you know that the first character released would be a complete rip off of the character "Cyclops."

Surely, the characters would get better, right? It was only my sardonic, sarcastic style (thank you for that assessment on Twitter last night) that was making me think this was the worst idea anyone has ever had. Had to be. This is an idea born from Stan Lee, the guy who created Spiderman. There is no way this would fail miserably, would it?

Actually, yes. It would.

As further characters were revealed, it became clear that the entire Guardian Project was an idea that has turned into a cruel joke on both audiences it was intended for. The NHL fans finds this a laughable disaster. The characters are ripoffs of other characters, with an NHL color scheme and a logo on their chest. Those that have some small amount of originality are still sadlled with the pathetically sad powers they have given the characters.

For example, here are "The Wild's" powers: 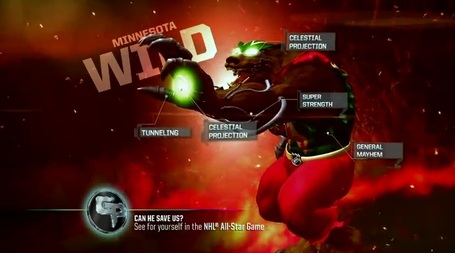 As Greg Wyshynski, the Puck Daddy himself, mentioned on Twitter, the worst mistake this group made was not being what he called "puckhead hip." His example was a play on the trap in New Jersey's character. Playing on the theme, there could be a "Dr. Snooze" character for the Wild, etc. In other words, the stereotypes of the league could have been used. If the team changes its style of play, there is a built in storyline twist.
Instead, the designers behind these characters chose to abandon the idea of a serious comic book (if there is such a thing), and went with the hokey, cornball angle. They continue to tell us they will face off against the ultimate evil power. If it were Gary Bettman, Colin Campbell, the KHL... that would be cool. Judging by where they have gone thus far, it will likely be Lex Luthor wearing an NHL jersey, face painted up like David Puddy, representing the die hard fan the league seems to hate so much.
The design and powers are where the NHL and Stan Lee lost the other group this was aimed at; comic books readers. The characters released thus far have nothing new, nothing cool, they have... nothing. The cheesy nature of them will turn off the comic books geeks in about the same amount of time it takes a comic book geek to turn off a supermodel. The designs offer little more than an insult to the "Graphic Novel" subculture, and they get insulted enough without the support of a major sports league.
Look, we were on board with this. At least partially. The idea was novel, it was just enough of a twist on two different fan bases that maybe both of them would be able to offer a touch of support and make it a niche market success story. In my original post about this, I wrote:

I will admit, I am curious about the project, mostly in a "It's hockey related, so it better be cool and not be patronizing" kind of way. I am guessing there are some comic book lovers out there who will think this is very cool, and some hockey fans who will think it is pretty cool. I am concerned a bit about taking two rather niche markets, and combining them into an uber-niche market.

Point: It better be cool, and not patronizing.
Result: Fail.
Point: I am guessing there are some comic book lovers out there who will think this is very cool, and some hockey fans who will think it is pretty cool.
Result: Fail
Point: I am concerned a bit about taking two rather niche markets, and combining them into an uber-niche market.
Result: They insulted both bases. Fail.
Point: I could be very, very wrong, and thus this post.
Result: I was, indeed, very, very wrong.
We'll admit, the merger between hockey and superhero is not an easy one to make. As the past has shown:
The blue-collar attitude prevalent around the NHL, both in fans and players, does not mesh well with a superhero meme. These guys works hard (Sorry Tom), they do not have super powers that make them so special they are unhuman. NHL fans like that the players are easy to relate to. Casual fans want superhuman stories, thus the idea that a comic book might work.
The only redeeming factor that may be left is that comic books are, sorry guys, for kids. They were never intended to be something that 30 year old men were supposed to be into. At least, not most 30 year old men. So maybe this still has a chance to be a success in the school age set. Though then the Facebook campaign doesn't make much sense.
The entire thing has been marketed to NHL fans, and specifically to the adult NHL fan. The execution here has been absolutely terrible. The marketing campaign was well executed, but they were given nothing to work with with. The daily reveal was a great idea in theory, but with the end result, is turning out to just be a cruel torturous ordeal that fans and PR team alike have to suffer through until this project can finally be allowed to die the merciful death it needs. Learn from history, stop making the same mistake.
With great risk sometimes comes great reward. This is not one of those times. Take the lessons learned from both sides and move on. As for hockey fans, especially here at Hockey Wilderness, we're done with the Guardian Project. We asked, you said there was some amount of interest, and we followed the developments. At this point, it makes no sense to continue exposing ourselves, nor you to this terrible mistake.
We now return to our regularly scheduled program, already in progress.

Just got a release about this exact topic. From the designers:

The Wild is a version of raw power coupled with brilliant intellect. He is an avid reader, taken from Minneapolis-St. Paul's rich literary history. At one moment, he is a deadly serious problem solver, the next an irreverent adventurer. The Wild isn't so much a superhero as he is a force of nature. He only has super abilities when he is in his "Wild" form although his incredible intelligence is nearly a super power on its own. Knowing his volatile side can be dangerously unpredictable, the Wild restrains himself at night so as not to cause any unnecessary mayhem. The other Guardians respect him and his wild side but they also know its destructive potential. As a nod to Minnesota's mining history, the Wild also can use his razor sharp claws to tunnel through the earth's crust allowing him to sneak up on enemy fortresses.
“With a name like The Wild, we needed an uncontrollable character that is completely unpredictable,” said Tony Chargin, EVP of GME Creative Affairs. “Giving him celestial abilities that took a little more thought and was inspired by the former franchise of the North Stars came about when watching a Wild game on television and noticing how many fans were wearing their retro sweaters.”

In other words, he is "Beast" from Xmen with a few tweeks to make it fit the theme of Minnesota. Got it. Although the explanation of the powers is interesting (OK, not really), it should be included in the release of the character, not the next day. That is a marketing fail, not a design fail. Though, the designers have clearly failed enough, so win is a win.

To those who inquired about the market demographic:

With an initial plan to reach an all-family audience and narrower target demo of tween boys, GME hopes to bring a new audience to the NHL, while engaging the existing, established hockey fan base through a compelling tale of good vs. evil.

In other words, casual fans, and if we happen to hook a couple NHL fans on the way, great.