I want to start off with an apology to Canucks fans. Yes, and apology. I all but guaranteed the Wild would roll over for the Nucks yesterday, and of course the hockey gods showed me just how much my lack of faith disturbed them. Now, to balance out the force... stop whining about the first goal. It was a good goal, and FSN's angles show the puck was still open. Also, it was one goal out of four. Would losing 3-0 have been better than 4-0?

Moving on. Big Walk today. Everyone wants a piece of the magic, it seems, and we will indulge them. Nice to see the kid get some attention. If he keeps playing well, and his style stays the way it is, he will keep getting attention. Amazing that this kid isn't part of the plan, but such is life.

Everyone needs to relax a bit today, breathe deeply and prepare for the next battle. Please head over to Facebook for the Question of the Day. And, if it so moves you, say a "thank you" to Dr. Martin Luther King, Jr. A great man, with a great mission is life, who accomplished great things. Enjoy your day, all. 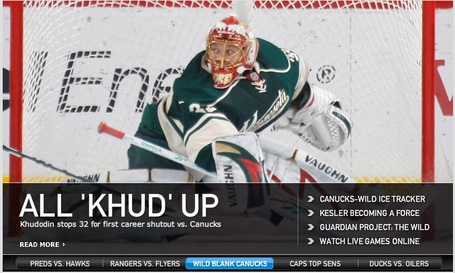 With attention comes an NHL gaffe. First of all, check the spelling of his name. Second, since his name starts with a "Who" sound, the headline doesn't make any sense, either. Your crack NHL.com team, everyone.

Five Takeaways vs. Vancouver - Minnesota Wild - Features Glen Andresen with his top points of the game. Plus, a great picture of Anton.

Wild is a whirlwind as it flattens Canucks | StarTribune.com - Russo's gamer.

Staubitz gets extra credit for versatility | StarTribune.com - Staubitz was apparently told not to engage with Koci. I don't like it anymore than I did yesterday, but at least it wasn't the players. Good game for Staubitz, who certainly answered the bell this time around.

He's part goaltender and part interpretative dancer | StarTribune.com - I know few people read every headline in the Walk. If you only read one, make sure it is this one. Great piece.

Khudobin’s Shutout Salvages His Weekend - If you read two headlines, read this one. Excellent breakdown of Borat from a goalie centric site. Great post.

The Third Intermission: The Motion of the Ocean: Giving in to the waves and Josh Tordjman - With the goalie dance, it is good to see the Aeros are still playing well.

Wild Stomp Canucks- That's all that matters, but there is more to it.

Canucks lose game and another defenceman - Vancouver perspective on the game. I'll get the tissues.