Everyone still with us? Hopefully you are enjoying the series as much as the bloggers had making it. The All Star break is almost over, and we are almost back to real hockey. This time off is ridiculous, and yet somehow... welcome. It will be great to get back to writing about hockey again, seeing how this season plays out.

This is part four of the series, with only the lightning round remaining. You'll get that tomorrow. Make sure you weigh in on the questions, too. The final long answer section has some fun behind it. Are the Wild buyers or sellers? If you were in charge, what would you do?

Not that you don't already know them, but here is our esteemed panel:

You have a better answer? Let us hear it.

Editor's note: Monica was not feeling well, and did not answer these questions. 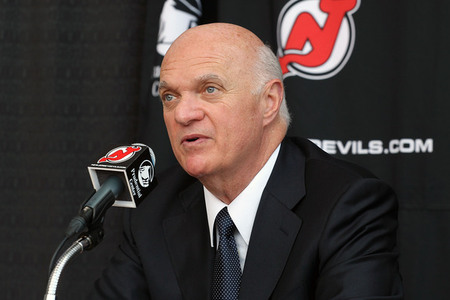 If on Feb 28th, nothing has changed, are the Wild buyers or sellers? Why?

Nathan:  If it were up to me? Sell. 2012-2013 should be the goal, and they should still stockpile prospects and picks. However, I don't pay the bills, and a third season out of the playoffs might be more than Craig Leipold and Chuck Fletcher can handle. Even a first round exit brings with it plenty of cash, and it's hard to turn that down.

Heather: I think they hold, with a slight edge on buying if someone looks good. Why? Because that would annoy me and that seems to be the theme here.

Elise: Sell. The Wild aren't going to win the Cup this year and getting knocked out in the first round of the playoffs isn't going to do anything to get fans back in the seats. Get some good, young players and build up a team that can really compete in the coming years.

Nathan W: Sellers, although the only trade I see happening if the Wild are 9th in the West is either Chuck Kobasew or Antii Miettinen for a mid-prospect or pick. That gives the team a chance to compete for a playoff berth (if Andrew Brunette gets traded, wave a white flag) while adding a piece for the future. Other trade pieces are John Madden and Jose Theodore, but I don't see there being much of a trade market for both unless someone is really in love with their veteran presence. Or in Madden's case, winning 3 Stanley Cups.

As for buying, there's no one rental which helps Minnesota off for two months and they're getting back Latendresse.

Dan S: Barring an epic collapse, we stay put with the returns of Latendresse and Zidlicky on the horizon. In theory those two would be bigger additions than anything on the market, and you already have those two under contract.

JS: I think they should be sellers, give guys like Bruno, Madden, Theo their shots with contenders, because there's no use mortgaging the future for a very unlikely cup run. We actually have some respectable, tradable assets this year, and I believe the Wild should take advantage, seeing as our prospect pool could use more offense and maybe we could free some cap space to prepare for the free agency period. Next year should be a good year if all goes well.

Ryan: If the Wild are three points out of a playoff spot come the trade deadline, I think they should at least get some depth.  They obviously aren't in the market for a big-ticket item, but maybe a couple pieces that can help them sneak in.  Although, teams in the past that are right on the bubble tend to stand pat.  If the team happens to fall apart between now and then, they'll have some expiring contracts that other teams may be interested in.

Jeremy: I think the Wild will be buyers. Pretty much every indication from Craig Leipold is that he expects this team to be a playoff team and if they are sitting where they are now I would expect them to make that push. As fans we can talk all we want about how it would be better to get a high draft pick than to barely make the playoffs, and there is some truth to that. But the financial reality is that the team needs to make the playoffs to make money. However, I also think Fletcher will try to work some magic and move some potential FA's while also adding.

Bryan: I've expounded on this already, but here's the short version. Both. They will sell off a UFA or two, and get a pick or two, and will be looking for a RFA in return as well. 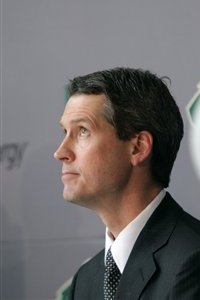 You take the reigns if the Wild for one day, and your decisions cannot be reversed. What do you do?

Nathan: I move Cam Barker anywhere. I move Antti Miettinen, Andrew Brunette and Jose Theodore, I see what I can get for Nick Schultz. I do anything I can to bring in young talent and a defenseman who can lead the breakout. Then I try to get Jason Zucker and MIkael Granlund to come into town as soon as possible to get them ready for the show.

Heather: Havlat for Bobby Ryan, straight up. ;) Also, I accidentally "lose" Khudobin in front of his parents' house in Russia and sign Barry Brust to play for the Aeros again. Sorry kid. Somebody had to come, so somebody had to go. *ahem*

Elise: Oh gosh, this is a lot of imaginary pressure. I have no idea. I'd probably spend the entire day trying to figure out what to do.

Dan S: Oh man. I think you have to find a way to get rid of Cam Barker's contract. That cap space is too valuable, and he's been passed up by 3 rookies.

JS: I would try (and fail) to acquire Claude Giroux. I would also force the players to give me autographed jerseys of them :P. Other than that, nothing, because our fantasy league proved that I suck rather badly at wheeling and dealing, and I wouldn't want to screw this team up.

Ryan: When you look at this roster and their salaries, there aren't many of those ‘bang for your buck' guys.  I'd start out by weeding out some of the bad contracts to try to free up some much-needed cap space.  For instance, I feel like they could find cheaper options than Cam Barker or Chuck Kobasew to fill their respective roles.

Jeremy: I trade James Sheppard for Evgeni Malkin and Sidney Crosby. But seriously I don't think there's anything I could do in a day to make a difference and I defer to Fletcher who is much smarter than I am. If anything I might look to trade for the rights of a couple of my favorite college players (Matt Frattin, Brett Hextall, Danny Kristo)

Bryan: Knowing that Fletcher was coming back the next day, I would take the heat off of him a bit. Cam Barker would be on waivers. Fletcher can't do it for respect of what he gave up to bring him in, too much money on the contract, etc. This would make it possible to get rid of him without the lingering effect of it being on Fletcher's shoulders.

Shep would be gone. The project is over. Cut him out completely. Gone. Any way possible.

First phone calls would be to the teams near last place, wanting to know what it would take to get their first round picks. Nothing is off the table. I want top five pick or two. (Lou, babe, call me.) I am also entertaining offers for all UFAs, no reasonable offer turned down. Basically, I'm wheeling and dealing, and I want a dance partner. Brian Burke? Deal. Glen Sather? Hell, yeah. It's time to make some moves. Get me three or four phones. Let's get this done.

Oh, and call Kayem foods. It's time for a new hot dog supplier.