You are almost through it, I promise. We continue our round table discussion today by looking at the prospect angle, and whether or not the Wild have the coach of the future in place or not. We'll be nice, for the most part. Again, rather than spend your time reading a lengthy intro, jump right into the questions.

Don't forget to let us know how you feel, too. We might be the ones with the blog, but we aren't the only ones with an opinion. Jump in, tell us we're idiots, let us know where you agree, or just tell us you love us. 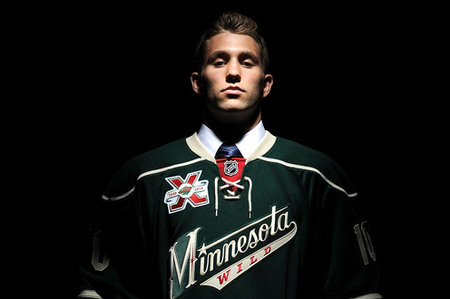 He's good, but is he that good?

Are the pieces the Wild need in the system, and who is the top prospect in your mind?

Nathan: Honestly? The future looks good. Having seen almost all of the Wild prospects in person, I can say that I am much more impressed now than I was three or four seasons ago. Sure, some of the guys in Houston aren't exactly lighting it up, but when you look at the whole group, it's the best set of prospects we've seen around here in a very, very long time, maybe ever. Jason Zucker, Mikael Granlund, Marco Scandella, Erik Haula, Matthew Hackett, Darcy Kuemper and Casey Wellman are all performing well at their level. In fact, I wouldn't be surprised to see Granlund, Zucker and Wellman up with the big club in camp next season. Now, are they good enough to step in and make an impact? That is very questionable, but they are poised for a good run in 2012-2013. That should be the goal right now. That season is where you will see what this club really has to offer.

The best prospect? While Zucker is absolutely tearing up the NCAA as a freshman, and Erik Haula is performing above his expectations as a centerman, Mikael Granlund is still the one playing against men instead of boys and producing at a very high level. Granlund is the centerpiece.

Heather: Well, if I'm right that shitty chemistry is the problem with this team, I'm not sure how to answer this. How do you arrive at a team that gels on and off the ice? Presumably by magic, so maybe it's time to start saying incantations and waving wands. I don't freaking know.

Elise: The Wild have some decent prospects in the system but I don't know if it's going to be enough. It's so hard to tell with prospects which players are going to excel (or Xcel, haha see what I did there) and which will plateau. There are definitely some good blueliners in the system, which fans have already seen a glimpse of this season. Goal-wise, it sounds like there are a couple of solid baby goalies in the system. I'm not as confident with the forward prospect depth, but the prospect I'm most excited about is center Mikael Granlund. He seems extraordinarily talented and is already playing with men over in Finland. And the more Finns, the better.

Nathan W: Yes and no. The Wild have a good core presently with Koivu, Havlat, Burns and co. and some of the side pieces can be replaced by those in Houston. GM Chuck Fletcher has done a great job of refilling the prospect cupboard but the team still needs another year or two of quality drafts (especially with the first rounders) and finding hidden gems after a half-decade of inept drafting and asset management by the previous regime. I don't believe the Wild presently have the one piece needed in the system (Granlund is close but not there) but they will be able to use the current pieces in the system for leverage and to not have to overpay for 3rd and 4th line talent.

Dan S: They just need talent, no matter how. The Draft, NCAA and CHL free agents, trades, whatever. Call this timely, but look what Jared Spurgeon, who wasn't signed by the Islanders, has done so far- cool, calm, collected, and cost-efficient. I like Fletcher and Flahr's aggressiveness with the NCAA free agents, kids who are probably more NHL-ready physically (we're coming for you Matt Read of Bemidji State!)

That being said, the crown jewel is Granlund. We haven't had an offensive prospect like this since probably Pierre-Marc Bouchard, and when I got a scout telling me he was the most creative playmaker in last year's Draft Class, with first line upside (!!!), then we're in business. Mikko Koivu desperately needs talent to play with on the "top line."

JS: While I do think Granlund will be huge for us someday, I think we do not have that missing piece in our system just yet. Granlund is very likely our best prospect. Hell, some are calling him the future best Finnish player, and well there have been a ton of great Finnish players. Haula is very intriguing to me though. He's an enigma wrapped in a mystery. I wonder how he'll do as a pro.

Ryan: We gave Ryan a pass on this one, since he is an outsider, and is not going to know the Wild prospect system. He'll rejoin us on the next question.

Jeremy: I think the pieces are there. If there is one thing Chuck Fletcher has done and done well it is rebuilding the prospect pool. Just look at how many guys from Houston have been given a chance this season. Casey Wellman looks like he is going to be a good player. Jared Spurgeon continues to impress me. And to top it off last years draft looks like a win for the Wild at this point. Mikael Granlund is the top prospect. He is going to be a special player in the NHL. He is smart, hard working (sorry tom) and creates offense. A close 2nd at this point is Jason Zucker. I really hope the Wild sign him sooner rather than later because he is one of the best players in the WCHA.

Bryan: Not yet. Granlund looks to be a good piece, Zucker is ripping up the WCHA as a freshman, Erik Haula is looking like a steal from the seventh round. Nate Prosser, Casey Wellman... the list goes on and on. What I see right now is an a group of prospects that will fit with the team, can make a difference, and be solid NHLers. The depth in the organization is amazing, considering how bad the drafting was for so long. The goaltending and defensive positions look set for the foreseeable future.

What do I not see? The sniper they desperately need. I don't see the beast for the front of the net. So are the pieces they need in the system? Some of them, sure, but not the ones they need to be champions. 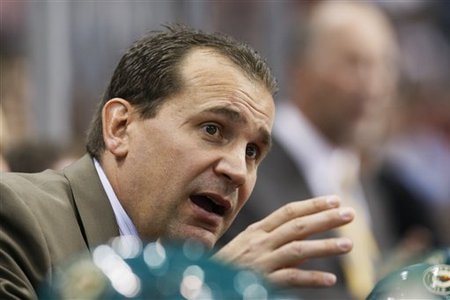 Does Todd Richards have a job after this season (why or why not)?

Nathan: Yes, but next season his leash is likely to be very short. The team is finally finding their stride in the system, performing at a level on par with their talent level, but has the typical ebbs and flows of a .500 team. They'll go on runs and look like world beaters, then absolutely collapse for a week. RIchards should be judged on how he reacts and motivates the team during those times. He isn't letting them get too high or too low, but his in-game management still leaves something to be desired. That's the part that needs to change next season, or he could be on the hot seat.

Monica: Honestly - who knows. How long do you give someone? If they make or do not make the playoffs could be a deciding factor.

Heather: Yeah, I think he probably does. Not sure how I feel about that as I really don't get the style he has them playing. Even when it's effective, something about it just annoys me. Let's blame Havlat.

Elise: Yes. The system finally seems to be taking hold and working. Some people doubt him and don't seem to like him, but I think he's smart and he could really coach a good team.

Nathan W: Todd Richards will have a job next season as the players have bought into his system and there has been improvement from last year. Whether or not he is the long-term answer remains to be seen and Richards has a few areas which he needs to improve, but for now the Wild are better off with Richards than starting over.

Dan S: Yes, and I maintain that he should have had next year as well; you simply cannot turn over a roster in such a short amount of time to get the personnel that fits Richards' system. Even then, if he got fired, what sort of message does that send to the rest of the league? That Craig Leipold gives you an inch of rope?

JS: He did get a lot of Fire Richards pleas against him in the beginning of the season (I was one of those people), but right now, he seems to finally have taken control of this team, as we are starting to see a team identity being formed. Many players have come back to form, and I believe Richards has a big hand in this, following the talk he had with the team's leaders. His seat has cooled off, and he's gained my respect, but it is still a fragile respect. He's safe though

Ryan: I think so.  Minnesotans may have a different frame of mind, but you can see the team buying into his system.  Plus, he has this team in the playoff hunt when most picked them to finish near the cellar of the conference.  That said, I think he needs to make the playoffs either this year or next.

Jeremy: I have been as critical of Todd Richards as anyone, but I am going to go out on a limb again and say he will be back. He has improved his coaching by leaps and bounds this season. The team is finally buying into his system and the system works. Barring an epic meltdown I believe he is given one more season to get this team to the next level.

Bryan: I am a bit more skeptical than my esteemed colleagues. I like Todd Richards, I like his system, and I like where the team is headed. The pressure is on, though, with the "on the fly" rebuild. Had the Wild came out and said "we're rebuilding, expect a couple down years," it would have been different. They made it clear they want to make the playoffs. As much as I may like him, and as much as I may disagree with the decision, if they don't make the playoffs, I don't see him back.

He is learning on the fly, and two years is a short rope for a new coach. When to call a timeout, when to pull the goalie, how to adjust the plan in game, how to motivate in game... things he learning. A playoff season buys him time to learn them. A non-playoff season doesn't.