For New Jersey perspective please visit In Lou We Trust (be nice... their team lost on a goal off the glass).

Please, do not take the lack of lengthy game re-cap as a slight on the win. There just wasn't much to write about. Fairly boring, innocuous game, save for the blooper reel that is the NJ Devils. I mean that sincerely. Nothing exciting happened in this game, and least, not jump out of your seat, rattle your brain exciting. Still, in a choice between this game and the Caps vs Bolts, it seems Versus did OK.

Cal Clutterbuck scored the opening goal after Ilya Kovalchuk did his best ie dancing performance and toe-picked his way to a face plant at his defensive blue line. Clutterbuck's shot was sick, short side, high. Few people on this planet could make that shot on an open net, let alone one being guarded by an NHL goaltender.

Kovalchuk would make up for it later by tying the game at one, but it just was not meant to be for the Devils. In what can only be described as a cruel twist of hockey god humor, this was the game winner (video via Puck Daddy):

Clayton Stoner, on a dump in that would likely have been icing, catches a stanchion and banks it in. His first NHL goal is a fluke, a blooper reel highlight, and a... game winner.

The Wild finally caught a lucky bounce and won a game. The sad part is, this is the worst team in hockey, and it took a fluke to beat them. They were still outshot by the Devils, after giving up only one SOG in the first period. Ridiculous. The Wild had no sustained pressure against a weak defense, and never really tested Johan Hedberg. If not for the Devils being the unluckiest team on the globe tonight, this would have been ugly.

Hell, it was ugly. An ugly win, but a win nonetheless. Put it in the bank and head to Boston.

Note: Enjoy this while you can. Wild just two points out of the playoffs. 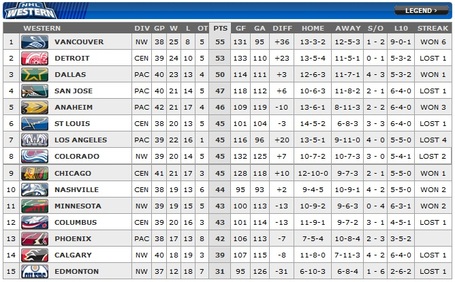