Since he was unwilling to directly come out and tell us it was his birthday, JS now gets a birthday post all to himself as we celebrate his big day. Being that he is barely old enough to watch a rated R movie, we'll try to keep it clean. However, since he came to the Walk to brag about his country's big win over the US, we may layer the snark on really thick.

Want to know what we got for JS for his 14th birthday? Make the jump.

Before we get started, if you are easily offended, please leave now. I will be making fun of Canada, and JS for being from Canada. Perhaps even the language he speaks. None of this is meant to be actual criticism of the nation, nor of anyone other than JS himself. I love Canada, and the Canadian people. Come on... hockey is your national game. How much cooler does it get than that? Plus, when we get toward the end, I'll make it up to you, I promise.

No, we did not get you a kick ass car. Keep dreaming.

Since JS has been old enough to drink in that backward nation he calls home since he was, well... born, we decided to get him some advice. If you are going to be drinking, and someone offers to "give you a ride home," don't take it. They clearly only want to take advantage of your youth. Go ahead and just walk home. The fact that you may get hypothermia only serves to make this a better gift for all of us. I mean... for you.

This is what a real flag looks like, sonny boy.

Since the one that you have committed your patriotism to is ridiculous, we have decided to give you a real flag. I mean, come on, what are you celebrating with the maple leaf? Maple syrup? The Leafs? Last time I checked, most maple trees were green, but hey, whatever it takes to make you happy, there JS.

This robot has more spine than your whole silly country.

How, in the year 2011, are you still a British colony? I know, I know, you're a commonwealth, right? Guess what? Virginia is a commonwealth, too. The federal government likes that idea so much, it kicked Virginia's arse twice just to keep them in line. You still have the freaking queen on your money, for cripe's sake. Stand up to them already. If you get in trouble, give us a call. We whooped them once, we can certainly do it again. All it will cost you is the Stanley Cup.

This is what French people look like in America. Pretty stupid right? Look in the mirror, sir.

Come on. French? I can't even muster a snarky response here. It's just so... French. Though, it does explain your complete aversion to fighting.

Yeah, it's a White Sox flag. So what? They are a group of wusses, too.

Speaking of the inability to fight, we have a couple of things for you. First, something everyone who speaks French should have. A white flag. Make sure you keep it clean, OK? You wouldn't want anyone to misinterpret your intentions. Keep in in your pocket, or get a nice carrying case. You know what? We'll get you that next year.

No real explanation needed here. It's a towel. You can throw it in when you give up. Like... now.

That's the TCU Horn Frog. Get it?

No, we didn't get you a frog. That would be insensitive, and wrong. Making such a blatant remark about your heritage would just be wrong. So we got you flippers and a snorkel. You know, so you could look like a frog.

By the way, this picture also came up under a search for "frog," but I thought you might like it too much. Try to clean up when you're done, big boy.

We have included your first national hero. Free of charge.

I may have been too hard on the nation of Canada as a whole. In fact, I know I was. Let me propose a compromise. As gift number eight, Canada and I have agreed to simply give you and "your people" a whole new country. We talked about Saskatchewan, but that would be cruel. To Saskatchewan. So, we decided to give you Quebec. And the Senators. Oh, and the Habs. All yours. You don't even have to fight for it, though, we all know you weren't going to anyway. Enjoy! (See, Canada, we cool now, right? No? Well, OK.) 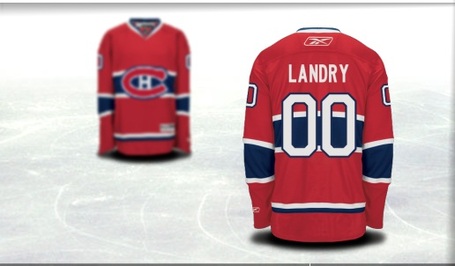 This one is just for you, big dog. No need to share it with anyone. No really. Don't share it with anyone. They will hit you. Though, with your die hard love for everything Habs, you understand that, right? Try not to sleep in it, you'll ruin it. And maybe wash it once a week or so. Or, just wear it in the shower. You have showers where you're from, right? I know you are from the back country somewhere, so maybe just jump in a lake with it on. You know, on July 3rd, when the ice goes out.

Well, that's it. I hope you enjoyed your little party, JS. For the rest of you, please don't be offended. I really didn't mean to offend anyone other than JS. I played on some stereotypes, and that was wrong. I admit it. I did it wrong on purpose. I am not a xenophobe, or anything like that. I'm not Don Cherry. I just wanted to make fun of JS, and this seemed the best way to do it.

No, we didn't really get you anything. Deal with it. You're an adult. Disappointment is all around you. Swallow it down. Store it up. The bitterness will grow.

Happy birthday, JS. It couldn't happen to a nicer guy. If anyone else got JS something, leave it in the comment section.