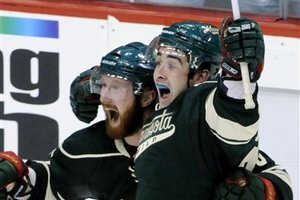 Anybody who has played ice hockey in any format will agree: Half the fun of scoring the goal is the thrill of seeing your shot beat the goaltender. The other half is expressing that goal with a good celebration, commonly known as a celly. The game has certainly seen some true beauties in the celly department. Guys like Theoren Fleury and his knee sliding antics and Tiger Williams' famous riding of the rocket.

The Wild aren't exactly subject matter experts in the goal scoring department, but this team isn't without some beauties when it comes to the celly. So in honor of a Wild victory which saw FOUR beautiful goals, I present to you, the top five celebrators in Wild history.

More celebrations after the jump!

Honorable Mention #1. Devin Setoguchi
Sure, the Gooch only has one goal at the time of publishing, but he celly'd it like it was his first ever in the big show.. Being the celly connoisseur that I am, I got curious and jumped on youtube to see if that celly was more than just a flash in the pan. Lucky for us, he's a repeat offender in the awesome celly department! How can you deny that fist pump and a "WHOO!" that could put Ric Flair to shame?

Honorable Mention #2. Keith Carney
Sure, Keith Carney only scored five goals in a Wild sweater, but how can you not appreciate a guy who kicks his feet up and relaxes after this red light igniter? True beauty, Keith, true beauty indeed!

#5. Brian Rolston
Rolston may not have had the most passion in his cellys, but he sure had swagger! You could count on one of two cellys from the man with a killer slapshot, either he raised both arms in the air, or he pulled out his trademark fist. Sometimes it wasn't even a fist, but just sort of dangled his hand out there for the whole world to see. Regardless of how modest he may have been, I'm pretty sure Brian Rolston knew he was the man. His cellys were simple, but you couldn't help but just love em!

#4. Brent Burns
Burns' cellys were straight from junior hockey, which always led me to believe a peice of his heart still believes he's playing in junior, back when it wasn't about the money, but the dream. Burns is pure charisma and not only did he have plenty of ways from scoring from the blue line, he had a repitoire of cellys to go with it! He was the master of the double fist pump, the single fist pump, and always saved the best cellys for the best beauties! Celly on in San Jose Brent! Your passion will be missed!

#3. Wes Walz
For those of you who remember Walzie, you know that no teammate of his ever matched his passion for the game. Unlike Burns, Walzie never really had any particular cellys he whipped out, but he savored every goal he ever scored and expressed it with as much effort as he played the game: 110%. I'm particularly fond of the celly Walz whipped out at about 1:35 of this tribute video, which we Wild fans are treated to in the Wild Anthem video. This video brought a tear to my eye as I reminisced on all the good times Walz brought us. We miss you Wes! You deserved a hard celly on every single goal you ever scored for the Wild!

#2. Marian Gaborik
Sure, it was tough to get Gaborik's motor running some days, but all it really took was a single goal to put his passion transmission up a gear. Best example was when he just happened to score five against the New York Rangers. The cellys just got better and better! And who could forget this outstanding beauty back when Pavol Demitra (RIP) was feeding Mary Ann Marian scoring opportunities? I thought he was going to take off flying on that OT winner!

And finally... the best celebrator in Wild history... the number one spot solidly belongs to...

#1. Cal Clutterbuck
Sure Rolston had swagger. Yes, Burns cellys like he was still in junior. Walzie did without a doubt have passion. And Gaborik's beauties are the best on the list thus far... Cal simply defeats all of them in every single way. Swagger? Cal is the Minnesota Wild definition of the word. Burns may play like half his heart is still in junior, I think Cal plays with his entire heart still in the OHL. Walz had passion, but with the drive Clutter plays the game, I'm willing to bet his heart rate rests somewhere around 110 beats per minute when he gets tired enough to go to bed. Gaborik had nice cellys? Clutterbuck puts them to shame. Don't believe me? Just watch. Whether he's fist jacking, arm pumping or just raising the roof, Cal Clutterbuck gives all competition a run for their money in the legit beauty department. Clutter is such a beauty when it comes to celebrating ginos he get's this extra feature spot for some great hits and bonus cellys. Celly on Cal Clutterbuck! You deserve every one! Have YOU been Clutterbucked lately?

Your turn, Wilderness. Who is your favorite goal scoring celebration expert for the Wild? In the NHL?