Share All sharing options for: Houston Hotdish: A visitor's perspective

It was all Aeros, all the time this weekend, with three games in three days, all in easy driving distance.

So, it was a good time to get T3I's Midwestern Photograher, Chris Jerina, down to Houston to get us all set for photos for a while.

For as much fun as we had wallowing in hockey goodness all weekend, the Aeros were a bit of an up and down affair. But the visit to Austin for Saturday's game was an eye opener. More on that after the break...

Friday's 3-2 overtime loss to Texas was our first look at Mike Lundin, who, apart from boasting some very sexy backwards crossovers, didn't catch my eye much. But I won't ever hold "invisibility" against a defenseman. He was back Sunday and it was the same story really.

The Aeros looked bad in Friday's game, getting outshot 35-23. Hackett was invincible in the first two periods, but the tying and winning goals were not his best moments. It's just one of those nights as a goalie that is a little bittersweet. You kept your team in it when they had no business being in it, and once they got their act together (somewhat), you let a couple stinkers in. 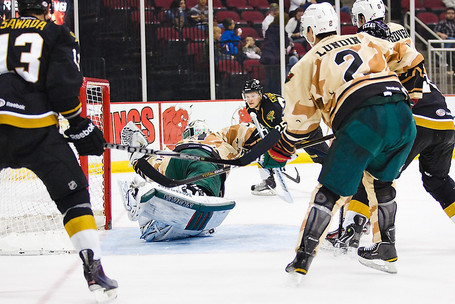 Hackett makes the save of the year, diving across and robbing the Stars of a puck that was 99.9% for sure going in the net. Photo by Chris Jerina/AHLinPhotos.com

But that's a delightfully rare occurrence for the young tendy, so I won't harp on it.

Saturday night, the Aeros stomped the Stars in their own barn, 5-1. Dennis Endras got the net for that game, though I couldn't get coach John Torchetti to say why he changed it up to have Endras in the middle of the 3-in-3 rather than the third day.

My guess is that a) with Hackett's last game ending on a weak note, he didn't feel that "ride the hot goalie" obligation and b) Endras works his tail off but wasn't being rewarded stats-wise because the Aeros always stink in front of him.

Endras certainly earned the trust, because it was the best game I've seen from either Houston goalie all season. In all honesty, the Stars should have had about 4 goals, but Endras was everywhere and I don't know how he stopped some of the really good chances the Stars had on him.

The guy is VERY bendy. I rather enjoy him. 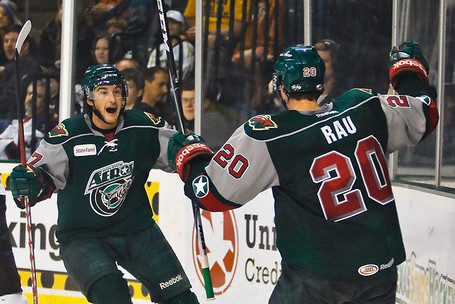 Casey Wellman and Chad Rau celebrate a goal like adorable Wonder Twins. The Aeros are just off the charts with guys you can't help but like. Photo by Chris Jerina/AHLinPhotos.com

And on that note, what I did notice Saturday night, with Lundin resting, Fredheim still up, and the Aeros defense as thin as it's been all season, was that the Aeros blue line was a little scary when picked that clean.

The deal is that Cedar Park Center's press box has an amazing "over top, but still close to the ice" view that we just don't get in Houston in our huge arena. And when you can see plays develop (or break down) from that angle, things jump out that you wouldn't otherwise notice.

And it was clear that they have some weaknesses on defense. Jeff Penner, who was the #1 star of the game for his goal and assist, is... not my favorite. He's got some offensive prowess, but when he's quarterbacking the power play, I'm on the edge of my seat waiting for the turnover.

Kyle Medvec is another defenseman who, I don't feel like he's quite got "the stuff," but as a rookie, I don't expect his decision-making to be up to pro speed yet. Still, I'm here to tell you how your prospects are doing and that's my take. Those two are my "kinda hold my breath when they have the puck" guys at the moment. And not in a good way.

So, let's just say, I'm VERY happy the Wild blue line is getting healthy again. We would gladly take Prosser back, too, if you're done with him.

(I should also note that Kris Foucault was a healthy scratch Saturday and Sunday. Sounds like the team wants a little more than they've been getting from him recently.)

Sunday's game versus Abbotsford, against whom the Aeros kinda crapped the bed when they met 10 days prior, was scoreless until the 4th round of the shootout, when the Heat's Dustin Sylvester put the only puck in the net all night. Both Hackett and Heat goalie Leland Irving (who just won AHL player of the week) both got credited with shutouts, BUT the Aeros went to 1- for-25 in shootout attempts and lost 1-0.

I'll give you a moment with that shootout stat: In 4 shootouts, they've had 25 scoring attempts, and have converted on only ONE. (Thank you, Casey Wellman.) The Aeros are in a VERY tight division and those lost 4 points will likely matter down the road. 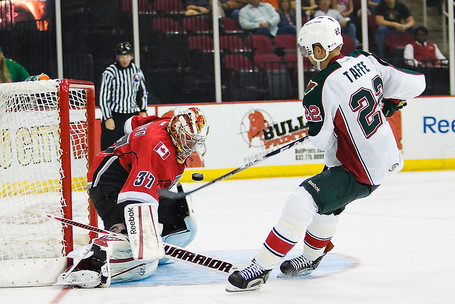 In fact, if division standings matter to you right now, those 4 points are the difference in leading the division and sitting in third, as the Aeros are tied for 2nd in points with Oklahoma City (OKC has the tiebreaker, however) and the Heat are ahead by just 2 points (and have one extra game in the books).

Of course, the worst part of that 1-0 game was that I was covering the game for the Houston Chronicle and had 12 inches to fill. Unfortunately, I was able to fill it with things like, "The Aeros now have the worst shootout record in the AHL."

All in all, however, the Aeros still look very much the contender and Torchetti seems like a pretty happy coach. He was rattled after Friday's stinker and said he was at a loss for what to do about guys taking bad, untimely penalties. Then he dropped the "I guess I'll have to bench guys after their first penalty" hammer. Uh oh, boys!

But he was very happy with Saturday and Sunday's games and if coach is happy, everybody's happy.

And speaking of happy, Happy Thanksgiving! Now, go say prayers of thanks for soon-to-be-healthy defensemen.