Finally, we reach the top of the rankings.

And if you want to watch the Wild prospects in action, catch them during the World Junior Championships. Guys like Johan Larsson, Mikael Granlund and Jonas Brodin are being showcased.

Earlier in the year, we did a readers poll on our top prospects. What has changed over the course of the last few months? Take the jump and find out!

Here were the results from the Readers Poll:

The now complete rankings are at the bottom of post!

"He's very calm," said Jeff, a 15-year NHL goalie. "He looked very calm in the net. He's got quick feet. They say that's his strength. As he's developing here as a pro, he's reading the play better. I think he just loves being a goalie. He loves the competitiveness of the position."

Hackett has quietly built up an impressive resume, playing for the Houston Aeros last season.

He help lead the team to the Calder Cup Finals in his first year with the Aeros, and this season, he played two impressive games with the Minnesota Wild, picking up 2 wins, a 0.974 save percentage and a 1.01 GAA. These two games won him the NHL's second star of the week.

With Josh Harding only one year left in his contract, Hackett has a good chance of becoming the Wild's backup next season.

"Jason doesn't really have a weakness," Blais said. "He's a leader at the University. He's fast and tough, finishes checks and blocks shots. I can see a future for him in the NHL. He's a leader and he's the type of player who rubs off on others in a positive way."

I doubt Zucker will become an offensive superstar, but does anyone care really? He skates hard, checks hard, blocks shots, great character, decent offensive potential. He is pretty much a jack-of-all-trades type of guy.

And you love guys like that on your team.

He has 24 points in 18 games, is the captain for U20 Team USA, and has pretty much accomplished everything that could have been accomplished. Don't be surprised to see the Wild trying to sign him by the end of the season.

It's easy to sometimes forget about the Swedish defenseman and 10th overall pick in this year's draft. Defensemen are usually only noticed when they mess up or score a goal and with only five assists in 30 games for Farjestads of the Swedish Elite League, the 18 year-old hasn't done much of either. Throw in the fact that Brodin plays a continent away from St. Paul and the kid flies under the radar.

So it was nice to see Brodin be Sweden's best defenseman in their 9-4 win over Latvia and pick up two assists. Although he hasn't been an offensive weapon in the SEL, the under-20 team has the 6'0", 172 lb Brodin do a bit of everything. He shut down Latvia's top defenders, had great gap control and was their power play quarterback.

It was there where Brodin set up sixth-overall pick Mika Zibanejad for his second assist as he previously took a shot from the point which went wide and bounced back onto the stick of Sebastian Collberg. Both assists were great and Jonas Brodin proved why the Minnesota brass thought high enough of the Swede to pick him.

He points out the great thing about Brodin: he plays great everywhere. He isn't the flashy dynamic offensive defenseman or that big hulky physical defensive defenseman, but he will move the puck swiftly up the ice, win the puck in his own zone, and that is really all you can ask for.

One flaw was that he was extremely skinny on draft day, around 166 lbs. Now, he is at 180lbs, so another summer of eating food and muscle building will have him at an acceptable 190lbs.

One major question is whether he could powerplay the Swedish team and produce offensively: he has 2 points in 1 game during his 9-4 win over Latvia, so it seems he is on the right track.

Stock is exploding after a dominating performance for Team Sweden at the under-18 tourney, finishing second to Teemu Pulkkinen in scoring. Extremely intelligent player reportedly hadn't done a lot all season, but picked the perfect time to elevate his game into the stratosphere. Not tall, but strong on his skates and protects the puck well. His a nice release on a wrist shot and is a skilled passer. Plays with energy and grit; leads by example and makes big plays at crunch time. Didn't appear on the scoresheet in the gold medal loss against USA, but it wasn't for a lack of trying from what I was told.

Probably a surprise at #2 since not many know who Johan Larsson is, but if you look at his resume, you'll understand why. He is the captain for the Swedish Team, and if you look at the graph below, you'll realize just how important he is to Sweden.

The graph shows who's the most important player, and who's the best player on the team, survery done by the players of team Sweden (thanks Joe89 from HFboards) 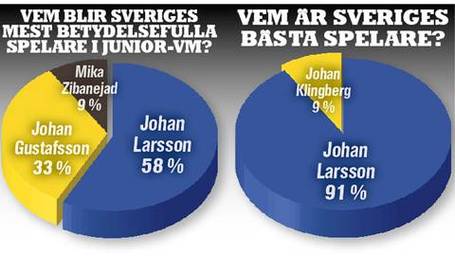 Like Zucker, Larsson is a guy you can put anywhere in your team and he'll do great. He can be an offensive threat but he can also be a defensive specialist.

Read the recent article I wrote on Larsson - Link

ASSETS: Is a smart playmaker with excellent vision and the versatility to play all three forward positions. Works hard, can skate and shoot. Great hockey sense, he can score highlight-reel goals.

The Wild have not had a prospect with this much potential since Marian Gaborik. Sure, Mikko Koivu has done well with the Wild but lacks the flashiness Granlund that creates hype.

And hype there is!

Granlund has done everything he could possibly have done since being drafted by the Wild. There is no higher point than being considered one of the top players in the Finnish League. Sure, he could cement his spot as THE best player in the SEL, but just being considered as a 20-year old is more than enough.

Watch the Wild pursue him like crazy and sign him to the NHL. There are questions of whether he can adapt to the smaller North American rinks and the more physical play of the NHL. Will he be an immediate top six forward for the Wild, or will he need some time to develop with the Houston Aeros. We'll never know until he finally gets here, which is very, VERY soon.

Here is the updated rankings: