Better to be Thought the Fool: A Final Word on the Cody McLeod Hit

Share All sharing options for: Better to be Thought the Fool: A Final Word on the Cody McLeod Hit

"It is better to remain silent and thought a fool than to open one's mouth and remove all doubt."

We posed the question after the non-punishment of Cody McLeod if it would be worse for Brendan Shanahan to not give a reason, or if it would be worse if he actually gave a reason, knowing full well it would be softer than Darcy Hordichuk. Yesterday, we got our answer. It is clearly better for league officials to simply zip it and save themselves the disgrace of opening their mouths, because what comes out is not helpful to anyone.

Since Russo got Shanahan on the record, we have his reasoning, however mind boggling it may be. We also have the opinions of a couple of the most objective members of media one could ever meet. All told, we have one of the greatest collections of absurd reasoning and passing of the buck we have ever seen outside of Washington, DC.

Make the jump for the walk through crazy land.

Let Him Know He Was There

When Lennart Petrell walked away from shoving Marek Zidlicky, we read this from Shanahan:

Petrel/Zidlicky: viewed extensively. Although Petrel's hand is on Zidlicky's back, we do not see a shove prior to the toe pick. No S.D.

Indeed, Paterell's hand was just sort of there. As Jim Mattheson in Edmonton wrote:

To Shanahan's eye, he saw a hand in the back of Zidlicky, almost as a warning from Petrell to the defender that he was there.

With the hit from McLeod on Spurgeon, Shanahan himself had this to say, via Russo:

"McLeod actually sort of reaches out with his hand almost in what appears to us to be an effort to gauge the distance and almost to let him know, 'I'm here,'" Shanahan said. "Spurgeon digs in, applies the brakes and gets run into."

Again... his hand is there to let Spurgeon know he is there. Uh... OK. It is always amazing to read some of the reasoning thrown around in these cases. This one is classic. When did forecheckers start warning players they were coming? Does that warning need to include a push from behind into the boards? How about instead a of a warning, the players simply makes a play for the puck, rather than slamming a guy face first into the glass?

Brendan Shanahan seems to think that players making plays for the puck along the boards are fair game, just so long as you tap them on the shoulder first to give them the 3 milliseconds of a warning that they are about to get slammed into the wall with the only thing between their brain and the glass is their nose.

This logic eludes me completely. Shanahan says that Spurgeon was applying his brakes. Of course he was, he was skating full speed toward a wall. What would you do, Mr. Shanahan? When did the onus shift back to the player being hit? I believe the rule now says the onus is on the hitter. Unless, of course, the rule changed again.

Of course, Shanahan is not alone in blaming the victim. We have two of the most highly objective reporters ever to pick up an pen to back up his reasoning:

Yes, that's right. One, Spurgeon "locked up his skates too much." Guess Spurgeon forgot to get the ABS option on his skates. The best part though? "Plus he's tiny." So... Spurgeon deserved what he got because he is small. Note to Justin Falk: In your next meeting with the Avs, do whatever you wish to David Van Der Guilik, since he meets the "being six inches shorter than you" qualifications Dater has laid out.

Oh, and Mike Yeo is a whiner. It's OK, coach, according to other fans (note - not reporters... fans like Dater), Russo and I are also whiners. Just trying to take the focus off of his skidding team. Indeed, because the reporters asked a question about the hit, and Yeo didn't immediately respond with "My team sucks right now." Solid journalism there, Dater.

But wait... Dater's partner at the highly creatively named All Things Avs, one Mr. Mike Chambers (no relation to Diane I am guessing), had these comments about the fact that McLeod went unpunished.

"Had his brakes on." Referring to McLeod. Let's look at a screen shot from the video, shall we? You know, since the moving pictures seem to be too much for Mr. Chambers. 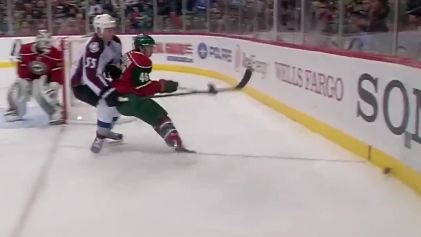 How many NHL players "put their brakes on" by moving into a duck foot stance? Could it be that maybe McLeod was bracing himself to lay a dirty hit? Nah. Can't be. He was just "putting his brakes on."

But then, magically, the tune changed just minutes later:

Now both guys are braking. Still only see one guy breaking in that picture, but OK, believe what you want. Spurgeon caught an edge? This is the magical "toe pick" from your first tweet? If a skater toe picks, he will fall in the direction his toe is facing. Look at the picture above. Spurgeon's skates are parallel to the boards. If he toe picked, he would have fallen toward the corner. Not exactly what happened.

Total accident as McLeod first "warned" spurgeon he was coming with the hand across the numbers. McLeod then "put the brakes on" by turning into a duck foot stance. Then, Spurgeon caught an edge, or "toe picked," while McLeod gently guided him into the boards from behind. I can see how this all happened. All you have to do is remove your brain, put on your fantasy land glasses and shut off all higher reasoning.

But hey, the Wild got a 5 minute power play AND a goal out of the deal. All in exchange for losing one of their top defenders for at least one game, likely more. That, my friends, is a trade every team would make, right? What say you, Avs fans? Let's say you can have a five minute power play and a goal in exchange for losing Eric Johnson for an indeterminate number of games.

We have new set of lessons to incorporate into our book for what is clean and what isn't:

1. When about to make a dirty hit, simply let the player know first by placing your hand on his back.

2. Never attempt to stop before running into the end boards. This is no longer considered safe, especially if you received what we shall affectionately call the "love tap" from the man about to crush you head first into a non moving surface.

3. When beginning a "hockey stop," avoid everything you have been taught since you were four or five. Turning your skate in the same direction is the wrong way to stop, should you wish to avoid supplemental discipline. Instead, learn from the kid next you and do a duck foot style "stop," allowing your media backers to claim you were stopping, yet allowing you to get full force into your hit.

Finally, a stern warning should be issued to Jared Spurgeon. Clearly he cost Cody McLeod a highlight reel hit by being short, having an innate fear of crashing into immovable objects at high speed, not heeding the warning hand-on-back that McLeod gave him, and being six inches shorter than McLeod is. How dare, you good sir?