Share All sharing options for: Southern Hospitality: An Aeros Primer

Well Wilderness, I'm not sure how you rank quite as high as you do, but the one and only Ms. Conduct has written a detailed primer on the Houston Aeros for you. You should consider yourselves special and monumentally lucky, since she wouldn't do this for just anyone. Well... OK, she probably would, because she is an amazing human being. Still, this is a great piece of writing, something you don't often get here.

Enjoy, and make sure and show her the love in the comment section.

Just like in E.T., the mothership is calling the Houston Aeros home to Minnesota for a game on Sunday, and you're ALL invited! They're playing the second game of a home and "home" series against the Peoria Rivermen (St. Louis Blues affiliate), who are a good, well-rounded team.

But I know there are a few people who aren't diligent readers of The Third Intermission, your source for all the best news and analysis when it comes to the Houston Aeros. So, first, shame on you for having a life outside of hockey. Second, I'm here to help.

Here's your Aeros Primer so that you can feel like a big ol' smarty pants Sunday and your friends will be all, "Whoa!" and you'll be all, "Thanks, Ms.Conduct!" and I'll wink at you knowingly.

The AHL West is insane (take a look). As of this writing, there are only 3 points separating 1st through 5th place in the division. The Aeros are currently alone in first place, but unless they win out the rest of the season, don't be surprised to see them move up and down the standings like a yo-yo until April.

The good news is, a rather brutal schedule up until now gives way to a manageable February and an absolutely luscious March where they have 14 games but never leave Texas. 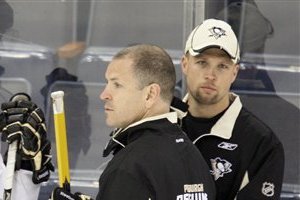 No pictures of Yeo in a Wild cap? He doesn't look happy about that.

Mike Yeo seems to have struck a great balance of offensive attackiness and defensive get-off-my-lawn-iness. He's gotten full-team commitment to high quality defensive play, and has the offense playing a really strong puck possession game that is just fun to watch.

And even when they're not 100% clicking, they more often than not still manage to win, at least lately, where they're 13-2-0-1 since the new year.

In years past, this section would have been full of UGHHHHHHGODWHYBOTHERRRR but now the Aeros have legitimate scoring. Even two seasons ago with Corey Locke and Krys Kolanos, there was a huge gap between the highly skilled guys and everyone else. Here, it's a gentler graduation of talent and that means losing any one player doesn't rock the boat.

Of course, getting Patrick O'Sullivan "back" was a huge boon. Like 13 points in 10 games boon. And every goal is pretty, yet he's still a lot stronger on the puck than I expected. Bonus is that he found immediate chemistry with Jon DiSalvatore and young Cody Almond, who must just be thanking the heavens to be on this line with these skilled veterans.

Robbie Earl is just wowing fans with his determination this season. He even went to the coaches earlier in the season and asked what he could do to take his contributions both on and off the ice to the next level. And it wasn't lip service. He's done what they've asked and he's absolutely money.

Casey Wellman is out with a shoulder injury, after being out with a foot injury. He's a good player, but needs space to work, and needs tougher guys around to make that space.

The team has also had a nice bump in experience and leadership with the signing of Jed Ortmeyer on Jan. 1.

While at the younger end of the spectrum, Carson McMillan has become a really solid player. He's flashing his offensive upside (though I suspect he'd still be a pure checking line guy in the NHL) and getting a lot fewer bad penalties.

Jarod Palmer had a super hot start, cooled off, but is back in the game with 3 points in his last 4 games.

And Minnesota kid Chad Rau... you just can't believe this guy's hands. If he can get linemates to make a little space for him and start staying on the puck better, he'll be a tremendous force.

If you're looking around wondering where Joel Broda is, he's too soft for the AHL and has been stuck permanently in Bakersfield. And Petr Kalus is a regular healthy scratch. I think he would have been long ago but there wasn't anybody better to replace him with. Now there is. 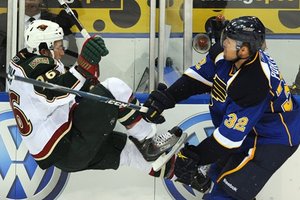 Well, you took Marco Scandella from us and BROKE HIM... thanks a lot. But luckily, the young crop of defensemen remaining in Houston have a great work ethic and are catching on well.

Tyler Cuma has come along nicely lately. He (and all the younger d-men) still bust out the occasional bonehead move, but I don't worry about that stuff from the young guys. What I love about him is that he's one of the few guys you'll see anymore who can throw a really pretty hip check. Love the kid going old school.

Nate Prosser was up and down early on but he's getting more and more solid. Nothing flashy, so maybe he doesn't get noticed as much, but he's come up big lately. Kris Fredheim is a guy you don't hear about much because he's on an AHL contract, but he's been a solid contributor, too.

Beyond the rookies, Justin Falk struggled since he came back (and obviously before, too) but he‘s getting his bearings again. It's going to take a while for him to become a consistent player, but when he does, look out.

Max Noreau is once again an AHL All Star and has worked to elevate his game to be more effective defensively, in addition to his incredible offensive numbers. Drew Bagnall is the veteran anchor of the defensive corps. He's got a whopping 1 point to his name but that's not his job. He's the epitome of "team guy" and that's enough.

Both Matt Hackett and Anton Khudobin have had a great game here and there, but they've both had pretty bad games, too. They seem to be finding themselves in the last month or so.

I wrote about Khudobin's struggles on T3I a few days ago, and he's been much better since. I'm not taking credit, but I think the game that prompted my writing that was so bad, it might have also been a wake-up call for him. But he's a streaky goalie and might always be, so we'll take the good while he's giving it.

Hackett's shown steady growth and plenty of determination through the season. Case in point: After a particularly brutal game a while back, he all but insisted that Yeo start him in the next one. Promising he wouldn't disappoint and he held up his end of the deal with a solid win. Love seeing that kind of chutzpa from a rookie tender.

So, there's your farm team in a nut shell. Get out and support the boys and see some of your future (and past) Wild.

BONUS: Ladies, Peoria's 6'7" goalie, Ben Bishop, does this backbend stretch where the back of his head touches the ice. It's UNREAL and worth the price of admission. I'm just sayin'.

The game starts Sunday at 1PM, and tickets are available. Make sure you come down for the game. It's not every day you get to watch the top Wild prospects live. Buy tickets HERE.

By the way, this was the standings in the AHL West as of this writing: 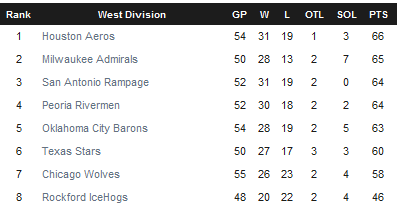