What (Not) To Expect on Deadline Day

Share All sharing options for: What (Not) To Expect on Deadline Day 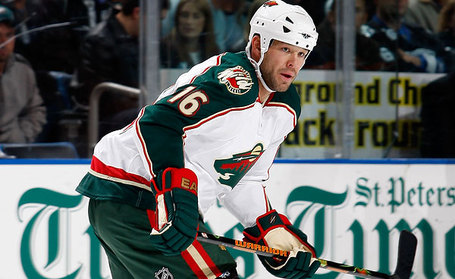 For Wild fans, the deadline has always been a bit of a tease. As we watch the build up around the league, we see players such as Chris Stewart, Kevin Shattenkirk, Eric Johnson, and Tomas Kaberle get traded. We hear rumors, some founded, most not. None of them involve the Wild.

Why? Because the Wild never seem to be in a position to make a blockbuster move. Pushing the cap and on the bubble. Never willing to concede defeat, yet never with the assets to make a strong push. Instead we are usually reminded that the Wild have assets ready to return to the lineup. In the past it was Marian Gaborik, now it is Guillaume Latendresse and later on down the road, Mikko Koivu.

Other times, we get... Chris Simon.

Make the jump for what you can expect from the deadline, and from Hockey Wilderness, on Deadline Day.

What you can expect from Hockey Wilderness

We will, as always, have a "live" blog going. We will update the main post with the trades as they happen, and we will have the comment section open for you to rant and rave about the deals as they happen. You can also commiserate, crying in your beer each time a deal is made that does not involve the Wild. Sure, most of the trades happen in the morning. It's noon somewhere.

We will provide a link to live TSN coverage that they normally stream on the web. You know, for you poor saps that will be at "work."

What you can expect from SBNation

Starting with SBNation.com/NHL, we will have every angle of every trade covered from the fan perspective. If the Bolts decide to trade Steven Stamkos to the the Flyers for Jeff Carter, you'll know about it. If the Wild make a deal for a fourth line forward from Florida, you'll know that, too.

Using the SBNation NHL network of blogs, you will get both sides of the deal through fan colored glasses. For the deal above, you would have the Tampa angle from Raw Charge, and the Philly angle from well... whatever blog it is that covers the Flyers.*

What you can expect from the NHL

Most of the blockbuster players have already been moved. Predictions are for a rather slow deadline, although, that prediction has been made in the past and suddenly the league blew up. All it takes is one or two deals, and teams start to panic a little bit. Things could be interesting, or it could be a long day of sitting around doing absolutely nothing.

Either way, we'll help entertain each other. If nothing else, we'll sit around and poke fun at the talking heads for having nothing to do.

What you can expect from the Wild

Unfortunately, very little. Chuck Fletcher has made it clear he is not selling, and with the team clearly in the play off race, he is right not to. They could be buyers for Dustin Penner, but as we saw in our discussion of that possibility, it will not be easy to pull of. This is really the only buying rumor surrounding the Wild. They are also said to be shopping Chuck Kobasew, but the return there will likely be a mis round pick at best.

It will likely be another spectator event for Wild fans. We will watch as competition loads up on draft picks, and as the cream of the crop load up on the final parts they need to make their run.

We'll collectively pray there is no 2011 version of Chris Simon.

We'll see you tomorrow, bright and early. Don't miss it, or you could miss out on things like HockeyBuzz's "servers crashing," people constantly asking what Eklund is saying, and hockey fans generally acting like idiots. It'll be good fun. Be there.