Hello Wilderness! I know what you're thinking: ''JS finally snapped! He's regressed to infancy!''. To this, I answer that I've always drawn like this, sad but true. What you see here right now is nothing much, but let me explain. Last season, I started doing these little paint sketches for fun as a result of my sister and I goofing off in class towards the end of last season. My sister, a Habs fan, wrote ''57'' in her binder. 57 being Benoit Pouliot's jersey number in Montreal, I proceeded to modify that 57 to make the following: 48 > 57 (48 being Guillaume Latendresse's jersey number in Minnesota.) After that, I drew a circle with feet and Lats' 48 stomping on another biped circle sporting Pouliot's 57. It looked like this: 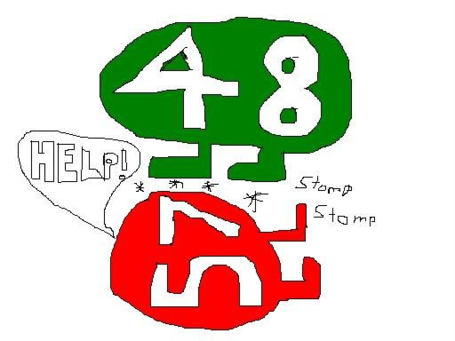 From that moment on, I continued to doodle these for each of the remaining Wild games (You can see my ''work'' on my facebook page). Before the season started, I had come up with the idea of doing a little feature to showcase my ''talents'', because when I was an officer for the now-defunct Unofficial Minnesota Wild Fan Page on Facebook, I had gotten some good comments about these silly drawings.

For some reason though, I never got around to it, but now, back by popular demand (by popular, I mean Bryan... come to think of it, maybe ''un-popular'' is more accurate here, because of all the enemies he's been making recently), I'm back in business!

These drawings are not supposed to look good. Hell, they're done on paint by a severely artistically-challenged guy. These are just meant to entertain, to get you guys smiling, maybe even chuckling to start off your day when you log on to HW in the morning. It'll also serve as a sort of water-cooler-type space to talk about the game that was played the previous night, the game that will be played in the near future, or anything that's going on around the league.

Let's open this up shall we?

In today's Grand Opening of the Art Gallery, we see a white brick wall, with Jose Theodore's number 60 painted on it. Last night, Jose Theodore had a brilliant 40-save performance on the road, hence the white wall with the 40 black marks on it. Regrettably, I missed the first two periods, but I still saw Theo pull a handful of nasty saves, which included one in which he quickly stacked the pads to direct the puck away from the net. After the game, I watched the complete highlights on wild.com , and I was just blown away.

There's one save in particular where he absolutely robbed Ryan Callahan with his paddle right on the doorstep, in a save that could very well be one of the Wild's saves of the year, especially considering it was done during a 1-0 Rangers lead. Theo came up huge to stop the team's bleeding in a well-needed rebound win after being clobbered by the Islanders the night before. Simply amazing.

Jose has now won 4 of his last 5 starts, allowing 12 goals on 201 shots (that's right, an average of 40 shots per game... four wins...), which gives him a .940 SV% in those 5 starts. Those 5 starts included a 46 save performance in a 3-2 OT win against the Ducks, a 4-3 win against the Avalanche in which he stopped 38 pucks and allowed the third goal with mere seconds left to play in the game, and of course, last night's 3-1 40-save win in which his team was doubled in shots on goal. I'm going to make a bold statement here and say that Jose Theodore is the best back-up goaltender in the league right now. These are the games in which we need big performances the most, when we rest our starting goaltender, and Theo always seems to be able to deliver. I can't believe Washington didn't hang on to this guy for at least another year.

Well, that was the grand opening. I expect to do these quick little posts any time I can, and I also expect to get my Thought Bubble feature back in the mix as well, it's been a while since I got around to this to. I'm a very busy guy with my studies and whatnot, but luckily, I'm also a champion procrastinator!

Have a nice day, Wilderness.