Share All sharing options for: From My Mom's Basement: TSN's "Jets Meter"

There are some things in life that I am guilty of, that I am not proud of, and that I learned my lesson and am a better person because of it. Contrary to a semi-popular belief I am not as self-righteous as may be thought. I am about as self-deprecating as anyone on the planet. When I am wrong, I admit it. I learn form it and move on.

Some people, some businesses, never learn. They beat a dead horse, insult the people who could be a new, untapped market, and generally make themselves look petty. The face of TSN is a great one. James Duthie, Bob McKenzie, Darren Dreger... the list goes on and on. It is a treat to get to watch them in the US when we get that rare chance.

That is why it is so disappointing when we in the US are exposed to the soft under belly of TSN. The side of the company you aren't going to see on the NHL Network. The side that apparently lets interns publish things to the web without editorial fail safes.

What is it I am referring to? The Jets Meter. Make the jump and learn all about it.

The lesson I was referring to earlier was learned when I came to SBNation. I held a strong belief that hockey did not belong in the south. I did not know there were passionate fans in those markets. All I knew was that they couldn't sell out their buildings, and that irritated me. I was all for moving the Coyotes back to Winnipeg, the Hurricanes back to Hartford, and the Stars could come home, and hockey in Florida? Really?

Then I met the fans, I met the people covering the sport in those markets (ahem, Russo), and I learned about the markets. The reason markets like Phoenix aren't working? Terrible, horrible, almost criminal mismanagement of the business side of the game. It is not the product on the ice, and it is not for lack of love of the game. It is the fornt office, and they needed to be called out for it.

Most of the hockey fans I know in Minnesota have come around to the fact that the NHL can work in the southern markets. If the Islanders can't sell out a building, why aren't they a target? Or Ottawa? Why only the Coyotes or Thrashers? Every time a southern market has a bad year, are we going to discuss moving back to Winnipeg? Did the market not fail for a reason?

Don't tell our friends at TSN that. Rather than being an objective part of the media, a rather huge piece of the objective media, TSN decided to go the other route and actually help the push to move the Coyotes to Winnipeg. They are, at very least, in some pretty tacky territory. Report the story, fine, but don't make it into a side show. Poor form. 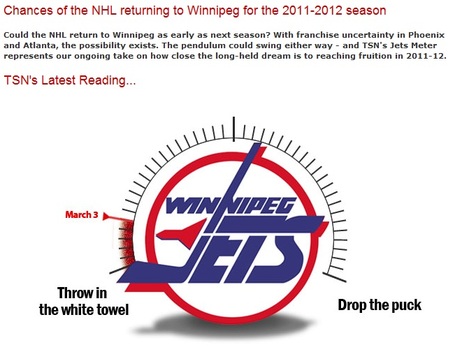 Look. I get it. Hockey is Canada's game, right? It was born there, it will die there, and people there live it, eat it, and breathe it. I love Canada, and Canadians for this exact reason. I take it as a compliment when people call Minnesota a "suburb" of Canada. This has nothing to do with the vast majority of Canadians.

I'm all for more NHL teams in Canada. The problem is, it takes around 18,000 people buying some rather expensive tickets to fill a building. It takes strong, expensive corporate partnerships to keep the team solvent. It's time to face it, Winnipeg is not an NHL town. It just... isn't.

This is coming from a guy who lost his team in 1993. The Twin Cities were screwed with their pants on by an owner who wanted out and wanted to make even more money than he already was. People in Minnesota told him to shove it, and he took off. The league knew it was a mistake, and let him do it any way.

Winnipeg was not an owner being greedy. They were poorly run, in a small market (too small for today's NHL), had nearly zero corporate support, and had to move. It would take at least the same type of commitment from Winnipeg to keep the team a float as it is taking in Phoenix.

I believe 100% that fans in Winnipeg love hockey. I even think some of them would ante up and buy tickets. After the shine wore off in three years, and the team was terrible, and the corporate sponsors saw there is as little to gain from supporting the Jets as there was before they moved, the sponsorships would dry up as well. Now you have a team, in a Canadian market that has to move. Again. Another black eye for the league.

TSN has the same numbers everyone else does. They know Winnipeg is a terrible market. They have the connections in the NHL to know the market is not viable. Yet they dedicate a portion of their site to create and track something like this? Disgusting.

Watching people salivate over stealing a team from another market makes my stomach turn. I am instantly a kid again, watching the Stars skate off the ice for the last time. Why would an organization like TSN want to be involved with something like that?

We don't get TSN in the US. Judging from what I have seen lately, I don't think we're missing much.