It's the most wonderful time of the year! This is, without a doubt, my favorite post of the season. It's our chance to take a light-hearted look at the game we too often take too seriously. So let's get right at it. Our awards may not epitomize the NHL, but they epitomize the NHL fan and Hockey Wilderness in general.

We'd love to hear your input on the awards, the winners and maybe some new categories for future HW Award installments.

Without further ado, here are your 2011 Hockey Wilderness Awards!

Dan - Okay, seriously? I can't find any girly names lol. So I'm going to have to go with J.S and say Jamie Benn
JS - Jamie Benn, becoming a good power-forward in the league. Also, I didn't want to give it to Marian Hossa.
Bryan - Henrik Sedin? No no, Alex Burrows. Oh wait, you said a girl NAME, not by an actual girl. Uh... Matt Douche-chene? No? Let’s see... Going with Marian Hossa. Great old fashioned girls name.
Nathan - Marian Hossa. Seriously, until Marian Gaborik out-performs him, this is Hossa's prize to lose.

Dan - Carlo Colaiacovo. You like tongue twisters? Heres one...
JS - Teemu Hartikainen. Not that hard to pronounce, but it's still an awesome name. Hardest to pronounce without chuckling would be Grant Clitsome (teeheehee)
Bryan - Has to be Alex Burrows. Just saying it makes me vomit. Impossible to pronounce without a barf bag. Niklas Hjarlmasson. You know, the normal spelling.
Nathan - Magnus Pääjärvi-Svensson. Three umlauts in one name? Dude rules all.

They play hockey where? (Best season by a player from a non-traditional market)

Dan - Pekke Rinne. Vezina-worthy playing in...Nashville?
JS - Pekka Rinne in Nashville. Tremendous year for him, yet he doesn't get nearly enough attention.
Bryan - Sticking with Steven Stamkos here. He was my pick last year, too. Amazing season.
Nathan - Paul Bissonnette. Hear me out. I didn't say it was the best season on the ice, just the best season. BizNasty became an icon this season. Playing in front of dismal crowds in Glendale, the future of his franchise in limbo, BizNasty transcended space, time and the interwebs to become the most affable athlete this side of Chad Ochocinco. Women want BizNasty, men want to be BizNasty and homeless people want to be in his good graces (seriously, dude raises huge cash for the Phoenix area homeless, brings them to games and provides them with clothing and food). Now he's a fixture on TSN? Paul Bissonnette turned a less than mediocre hockey career into something that may actually provide for his family as a commentator. Now, if he can learn how to spell, I'll be ecstatic.

Dan - Rick DiPietro vs. Brent Johnson. DiPietro causes the fight, starts the fight, then...drops...
JS - Haven't watched a lot of fights outside of Wild games, so the ass-whooping teenager Kyle Clifford laid on Brad Staubitz is my winner.
Bryan - Kevin Westgarth. No question:

Then the idiot came back for more?


Not a smart man.

Nathan - Yeah, it's Westgarth. Not even close.

Dan - Dustin Byfuglien. The Buff Man. If you heard your girlfriend was cheating on you with Buffman, wouldn't you be scared?JS - A certain former Wild GM... 'shudders' .. If I have to vote for a player, I'll go with Pavel Datysuk, because he gives d-men and goalies nightmares with his evil talents. It would go to Derek Boogaard, but he was injured for a huge chunk of the season.Bryan - John Scott. I know the name isn’t what does it, but the guy has never lost a fight. Ever. The guy is terrifying.Nathan - Evander Kane. It's a fighter's name. A lover's name. A soap opera character's name. It's the kind of name 99.9% of the human population isn't cool enough to handle. It's almost as awesome as Jean-Luc Grand-Pierre.

Dan - Our very own Greg Zanon!
JS - I'd be crazy not to go with Zuperman Greg Zanon here. Just crazy. Didn't really do better than last year, but still, 2nd in the league in blocked shots is nothing to scoff at!
Bryan - Homer pick. Greg Zanon. He doesn’t just block shots, he blocks any shot and all shots.
Nathan - It's Zanon.

The Summer's Eve award (Biggest douche-bag in the NHL)

Dan - Is, and will always be, Steve Ott. You douche.
JS - Trevor Gillies. To hell with that guy, I never want to see him again.
Bryan - This is always the most difficult. Is it Burrows? Is it Cooke? Kaleta? Ott? Avery? There is just so much douche in the NHL right now. I think I’m going outside the box here. Garth Snow. A douche running an organization full of douche. He wins.
Nathan - Trevor Gillies may have made a run this season, but it's still Matt Cooke's douchey world, the rest are just Ed Hardy wearing wannabe's.

Dan - Marty Turco. What the hell happened? Suppose to be an okay goalie behind a solid team. But no, he only plays 29 games and is outplayed by Corey Crawford (to his credit, Crawford is damn good)
JS - The easy way out would be to give this to Cam Barker for obvious reasons... but I'll give it to Chris Phillips with a -35.. of course he plays for Ottawa, but he's supposed to be pretty much their top defensive d-man and on top of that, he got just 9 points, after averaging about 20 a year. The only time he had less than 9 points, he played 34 games... and that was in his sophomore year. Ugly year for him, far and away his worst.
Bryan - Cam Barker. I know there may be other guys who had bad years, but how many defensemen were a healthy scratch in favor of three rookies?
Nathan - It's Chris Phillips. Biggest underachiever in the NHL this season. -35 and 9 points for a top pairing defenseman? Pathetic. Simply pathetic.

The Martin Skoula award (Biggest mistake by a team or player)

Dan - Chris Campoli and his turnover against the Nucks, leading to the OT goal that officially kicked them out of the playoffs.
JS - Can this go to the Avs GM for trading away Chris Stewart and Kevin Shattenkirk for Erik Johnson? If not, I'm giving this to Brent Burns, for whiffing on that pass in front of the net in OT vs. the Blues Jackets late in the season, which turned out to be the beginning of the end for the Wild. Funny I givet his award to Burns after all I did was praising him on his grade. Consider me remembering this incident and remove half a grade.
Bryan - Ladislav Smid


Nathan - No Dan Boyle scoring on his own team in overtime in the playoffs this year, so damn, I'm having a tough time. I'd say it's Rick Rypien going apeshit on a fan in at the Xcel Energy Center.

The Crash Test Dummies award (biggest injury of the year)

Dan - Max P. Wham, Bam.
JS - That Max Pacioretty incident was scary and a big issue. It's good that he seems to be O.K., but it's bad that someone seems to have lied about the extent of the injury.
Bryan - Sidney Crosby. The type of injury, the cloud around when he can return, his importance to his team and to the league... to have a guy like that go down for so long. Nothing will make the NHL wake up if not this, and it doesn’t seem to have done anything.
Nathan - Yeah, Crosby's will have a long-lasting impact on the NHL (hopefully) and Chara's hit on Pacioretty was malicious, but the injury that turned my stomach? Darryl Boyce's nose. 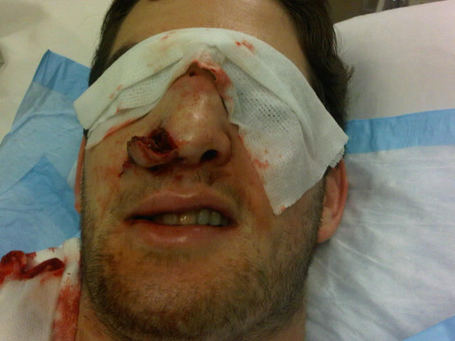 Ok Wilderness, it's your chance to let us know if we were right on or way off-base. Have at it in the comments.