Share All sharing options for: Boogaard Memorial a Chance to Say Goodbye

When our very own Shelby Leske (shelske) let me know that she and a friend (Katie Haag), had decided to start a memorial at the Xcel Energy Center for this evening to honor their fallen hero, the first thought that went through my head was: I hope this catches on. The fans need it, the state needs it, and the organization needs it. There needs to be some closure for those who cared so deeply for Derek Boogaard.

Originally, it looked as though I was not going to be able to attend. The longer I sat and thought about it, the clearer it became that I needed to be there. You don't often regret attending an event like this, but you most certainly regret not attending. Immediately upon arrival, it was clear I made the right decision.

Please make the jump for my take on the event.Before you do, make sure to check out the other stories on the event as well:

First off, let's give credit to Shelby and Katie for making this event happen. Without the two of them, this is not something that would ever have come to be. As simple an act as creating a Facebook event, sending a couple emails, and posting a FanPost here at Hockey Wilderness grew into a cathartic event for everyone in attendance.

Let's also give credit to the Minnesota Wild for taking a very organic event and putting together an event complete with stories and speeches from GM Chuck Fletcher and former teammate Wes Walz. Providing a central location for memorials to be placed, and giving the fans the words they needed to hear was a kind and classy gesture from an organization that has never shown anything but class.

Massive credit to the Boogaard family for coming to the event. They did not have to do that, and was truly a beautiful gesture to Wild fans. Amazing family, showing an unbelievable amount of strength to not only allow such an event, but to arrive and share such a powerful moment in time with the hockey family here in Minnesota.

Getting to the event itself, there were, in my estimation, 100 to 200 people (local news says 300) inside Gate One. A table was set up just outside the middle entrance gate (pictured above), with a podium and microphone for the speakers. A large picture and a Boogaard #24 home red sweater flanked the speaker, with the TVs above them showing highlights of Boogaard doing what he does best, helping people, signing autographs, and more than once, pictures of that famous Derek Boogaard smile.

On the table were flowers, pictures, and signs left by fans. Heartfelt words and condolences from the Boogaard's Minnesota family.

A Wild fan, Mary Laterneau, came up first and started off by explaining to everyone there just how important the Minnesota Wild family was. She made it clear that Derek's loss was not something that any Wild fan had to deal with alone.

Next came General Manager Chuck Fletcher who expressed condolences to the Boogaards family on behalf of the Wild organization, and called Derek's death "a terrible loss for all of us." Fletcher said "All of our players are involved in the community. All of our players are involved in charity work, but I don't think anyone was involved to the extent Derek was. Brad Bombadir often has to go around and find people to help with charitable events. But Derek was one of those people who would go to Brad and ask 'What can I do?'"

Wes Walz was next, and called Boogaard "a true gentlemen." Walz went on, saying Boogaard was "soft spoken, kind hearted, and a gentle giant." He offered a welcome moment of levity, telling of Boogaard's first training camp with the Wild. "He was 21 years old, and there's this guy skating around who is 6-8, 270 lbs, and a lot of us did not want to be on the ice with him. Guys were changing quicker, taking 15 second shifts and getting off the ice."

Walz explained that Boogaard worked hard on his game, both in Houston, and during the summer, that he constantly worked on his skating, balance, and conditioning, so if "fights went 45 seconds or a minute, he would always have the upper hand," stating that Boogaard knew his role, and what kept him in the league.

Talking about Boogaard's fighting abilities, Walz said that there was a "stretch five or six years ago, [the team] had seen nothing like it, we saw him knock about eight or nine guys out in a row. Usually you see one or two a year, but guys were dropping left and right." He added, "We loved having him on our bench. We were a small, quick team. We needed Derek in that lineup. I can tell you a lot guys on our bench grew an inch or two and were a lot braver when Derek was on the bench, which made our team better."

Finally, Walz pointed out that Boogaard "didn't like to fight as much as every thinks he did." He said it had to do with his "natural demeanor, of being a nice guy, but he knew that is what kept him in the NHL. I'm sure if you asked him today, he would rather... one thing I know he loved to do was running guys through the glass and put them in the seventh row."

After the levity from Walz, the evening took a solemn turn, as the Boogaard family came out to thank the fans and the organization for the love and support they had shown for Derek. Originally, Derek's brother Aaron and his sister Krystin stepped to the mic, with Aaron speaking very softly, making a comment about hoping he could make it through the words he had on the paper in front of him.

He didn't make it. In a moment that made it clear just how human this entire event was, Aaron broke down and returned to the comfort of his family in tears. It was, by far, the most difficult thing I have ever watched unfold as a sportswriter. If anyone still needed something to make this real, that was it. My lip may have a hole it in from where I bit it to keep from crying myself.

After a couple of moments, Krystin and Derek's youngest brother Ryan delivered the eulogy they had written. They thanked everyone for coming, thanked the Wild, and began to speak of their brother, noting that two words they had heard and read repeatedly describing Derek were "teddy bear."

As they spoke, the crowd was as respectfully silent as I have ever seen that many people. Everyone was in awe of the strength it must take to stand in front of that many people you have never met to, for the first time since the death of your loved one, deliver words to comfort them and not yourself.

"Judging by how many people have written our family, juding by the impact that Derek has had on the lives of everyone here tonight, it is obvious what he has meant to a lot of people," said Krystin.

Krystin went on, fighting through the tears, saying "What is a teddy bear? First and foremost it is a source of comfort. Having heard from his teammates, we now know how much comfort Derek provided on the ice. Secondly, a teddy bear is dependable. Derek was dependable to a fault, you could depend on him for anything you needed. At anytime, your priority became his priority."

Ryan then stepped to the podium, and continued where Krysten left off. "Teddy bears are usually big, and while he would hate to admit it, cuddly. You wouldn't think of Derek as cuddly, but there wasn't a person alive who didn't have more love to give or more love to receive. Lastly, teddy bears are loyal. They are a constant reminder of what is good in our lives. Love, trust, friendship and selflessness. Teddy bears give, and do not ask in return, and this is unconditional. Derek was a teddy bear, and always will be our teddy bear."

After the family spoke, the media moved inside the gate to talk to some others, including Shelby and Katie, to give them their well deserved credit. The Wild were then gracious enough to ask Derek's mother if the creators of this event could hand deliver the flowers they had brought for her specifically. She accepted, and spoke briefly with the young heroes.

Wild fans outside the gate spontaneously broke out in song, offering Amazing Grace, the Wild anthem, and Oh Canada in tribute to Derek.

To be certain, the memorial tonight gave a much needed reality to the entire situation. We do not know what happened to Derek, nor after hearing the words this evening, does it really matter. We all learned that Derek Boogaard was not just a hockey player. He was a loved and valued member of a family, a friend, and a teammate. He was, as we are forced to accept, human.

Grab someone you love tonight, and every night, and give them a big hug. Tell them you love them, and tell them how much. Then, explain to them that the Boogeyman is never something they should fear.

To the Boogaards, I offer my personal thanks and my deepest condolences. Your loss is profound, and one I cannot imagine. Thank you for allowing us to be a minuscule part of that grieving process, and for inviting us into your family, if only for a few minutes. The strength, pride, and courage you showed tonight will be something I remember forever.

Finally, here are some pictures I took of the memorial: 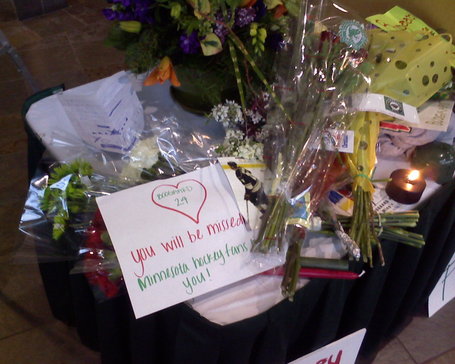 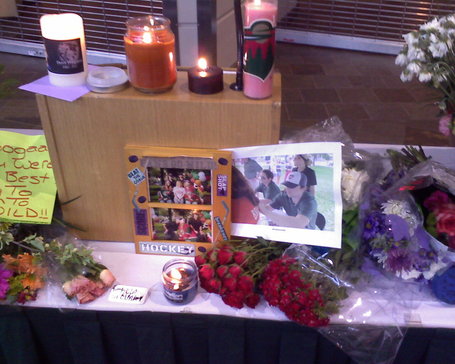 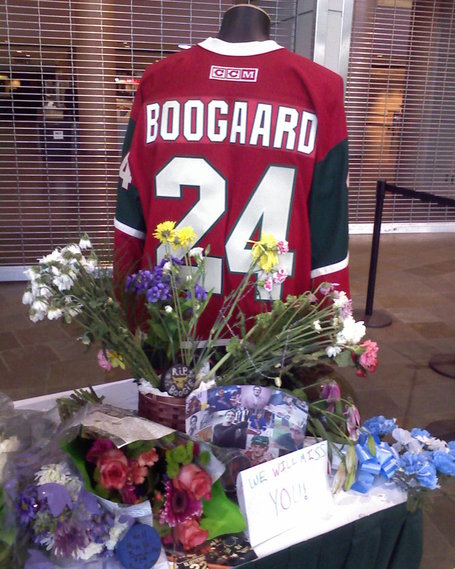 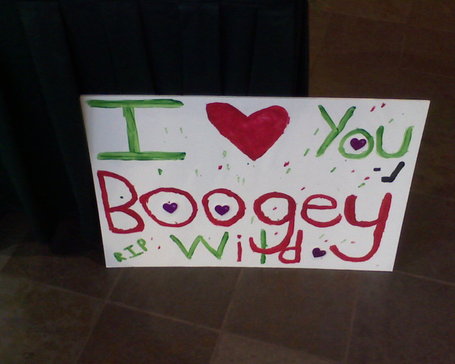 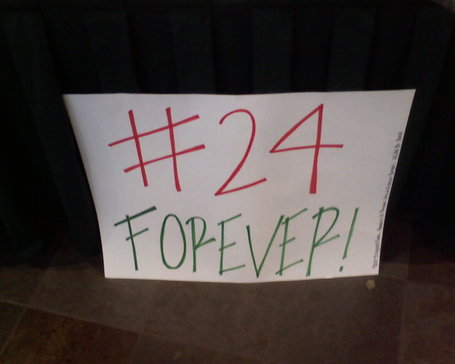 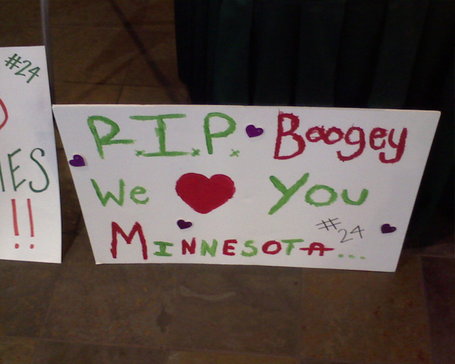 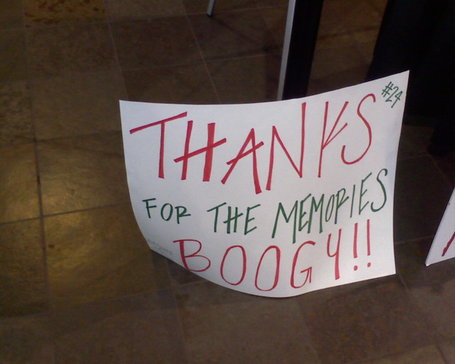 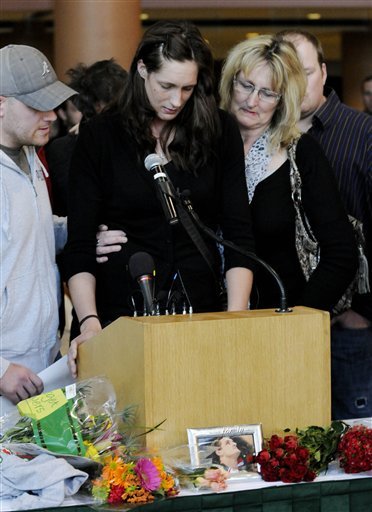 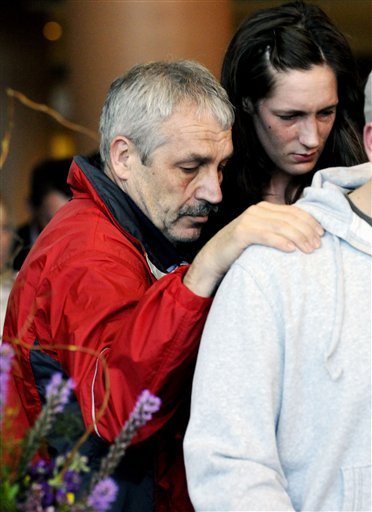 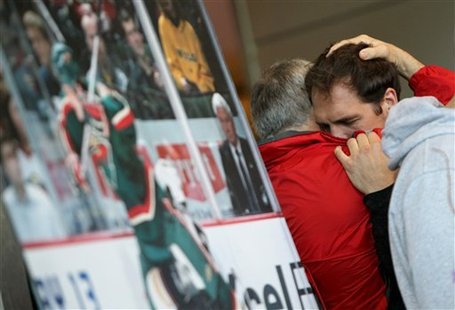 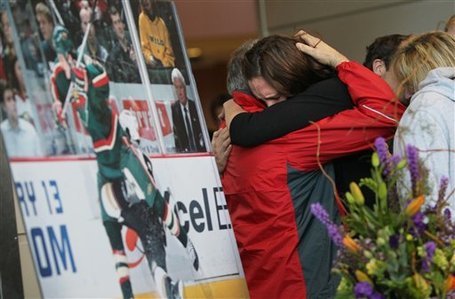 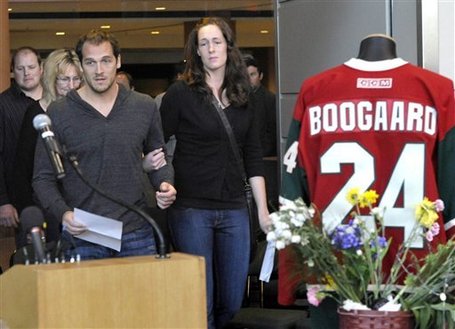 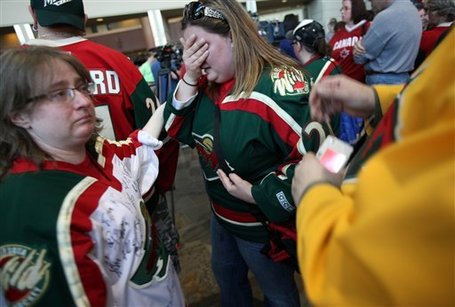 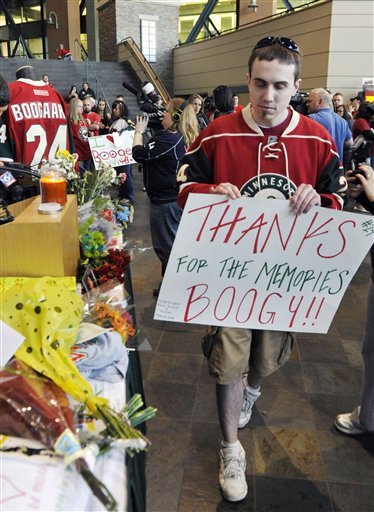 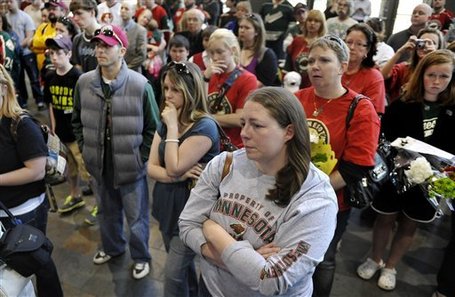