Here's a guy that does everything right, no major flaws, yet is considered a late round pick because of his questionable upside.

He takes faceoffs, very responsible defensively and is just an efficient and effective player. He has tons of character and is the type of player coaches love to have on their team. He is has a very solid frame (6-1, 204lbs) and just seems to have all the tools that make a very good NHL player.

However, it is his offensive upside that comes into question. He plays a very straightforward game so he doesn't have that much offensive creativity but he did score 66 points in 63 games which is no easy task by any means.

But on draft day, I feel some teams might take him higher than expected. Jenner has all the tools to become a solid NHLer and while his upside is in question, he has put up the points in the OHL, and has improved his skating since the beginning of the season.

a strong defensive player ... passionate, character player ... a strong faceoff guy ... good on the puck and oozes hockey sense, plus has a tremendous work ethic ... plays an honest game in all zones and does the little things ... clutch player  ... plays with an edge ...  got quick mitts and the ability to finish in close ... not a flashy guy, but a pure leader who inspires with his example  ... the biggest knock is his skating, but scouts say he's noticeably improved

the complete package ... a very smart, hard working player ... defensive minded ... has room to grow offensively ... a safe pick, but also someone with upside ... has some offensive skills and will take the puck to the net every chance he gets ... a really intelligent player who makes good decisions with and without the puck ... is intense and will do anything to win ... not the most offensively creative player available ... his skating is a little choppy and he'll need to improve his explosiveness ... his stride is a little heavy for the next level of play but has improved

has great size and strength and is very hard to move off the puck ... not afraid to get physical and he can handle body contact effectively as well ... has a good release and likes to shoot the puck and wants the puck to be on his stick ... a lot that translates well to the NHL level ... constantly calls for the puck at inopportune times ... skating is still pretty choppy, but it’s improving ... needs to find some consistency and make better decisions with the puck to be a more effective player

He would be a very welcome addition to the Wild.

The Wild need any prospects that have a good chance of being NHLers as well as potentially chipping in offensively. While we already have Granlund, Jenner would only help strengthen the center position.

Jenner is a good prospect but I feel there are just better options at #10. Other prospects that also have a solid chance of becoming NHLers but also have a higher offensive upside, which the Wild need desperately. 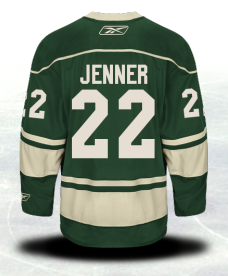