I'm hoping I am not taking a biased approach to Puempel because wanting to not repeat the same mistake last year and underrate your natural goal scorers (Jeff Skinner).

But Puempel has that dangerous shot, can shoot from anywhere and has the hockey sense to find open areas. While he doesn't have that imposing body frame or that breakaway speed, neither did Skinner and see how well he is doing in the NHL.

That said, there have been worries about his consistency, especially away from the puck. In addition, he plays on a very weak Peterborough Petes team so some have to wonder his ability to carry his team.

I feel Puempel is that type of prospect that is going to have alot of question marks, but if a team feels he can fix them or if a team feels those question marks aren't that big of a deal, they'll select him earlier on the expected just based on his ability to score. Because teams love scorers.

can snipe pucks from anywhere in the offensive zone and does the unexplainable ...  has unreal hands and offensive hockey sense ... smooth stride and can gain separation ... will go into traffic ... anticipates the play extremely well ... seems to find ways to get himself into scoring situations ... average size, strength, skating ability and compete level ... needs to get stronger

one of the better goal scoring forwards available in this draft ...  has a great shot and  can unleash it anywhere on the ice ... a very intelligent player and seems to find his way to loose pucks in front of the net ... needs to improve his ability to take the puck to the net and create offense from that ... needs to refine the rest of his game (play along the boards, backchecking, intensity).

one of the premier goal scorers in this crop ... got an elite release on his shot ... exceptional offensive hockey sense ... not an overly dynamic player, but has great hockey sense and the ability to capitalize on any opportunity he gets ... has a tremendous will to succeed ... his positioning was not very good at times ... needs to improve his consistency

Anywhere in the Wild organization. Seriously.

We need scorers. We need guys that can put the puck in the net, and Puempel is one of the best in this years draft class at doing that. In the near future, imagine a Granlund-Puempel duo. Drool...

But if the Wild selected him at #10? I wouldn't be too against it. In the 2011 Draft, there is just so many prospects at around the same level and if the Wild feel Puempel's offensive upside is worth taking him earlier on, then so be it. Because while he isn't my favorite, its hard to complain against a scoring winger that has won CHL Rookie of the Year as well as team MVP awards. 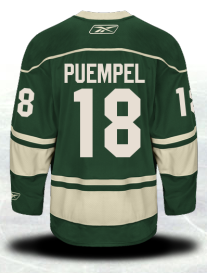