While this year, there is still no clear cut #1 choice, Ryan Nugent-Hopkins is still considered the favorite.

He's got top notch offensive skills, with great skating, hockey sense and defensively play. He's got everything you want with the first overall pick. Got great playmaking skills, a good shot and knows how to use them.

The only real knock RNH has is his size. He is average sized at 6-0 but weighs at only 164lbs, which is very skinny. But at the same time, you see him dominating the WHL and wonder: how much more will be dominate when he puts on 30 more pounds?

Because 190lbs isn't out of the question for Nugent-Hopkins. And if he's got the skills and character, why not for the first overall?

the complete package ... good at both end of the rink ... very mature and intelligent ... just a mature individual and a great kid ... taken a real leadership role ... he’ll battle through checks ... great personality ... he works very hard and competes at a high level ... physically behind some guys at this stage ...

his offensive ability is uncanny and is lethal when shooting or passing the puck ... top-notch passer with an underrated shot. ... very good skater that is among the shiftiest players available ... possesses a very high-end skill set that is arguably the best in the entire draft ... defensively reliable ... a dangerous takeaway artist ... exceptional speed and creativity ... lacks breakaway speed ... had some struggles finding the back of the net this season, especially at even strength ... smallish frame will need to mature ... needs to improve overall strength

I'll MAKE him fit with the Wild!

As much as we can hope and pray, no forces in the world will make the nine teams ahead of us forget the Nugent-Hopkins is still there.

Besides, I don't like his name on the Wild jersey. It can't fit... 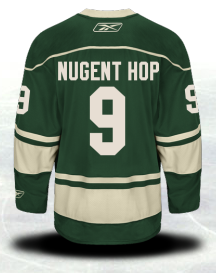