Unfortunate last name but a 6'3 192lbs frame to back him up, Siemens has that physical edge that teams love on the blueline.

Rangers took Dylan McIlrath over Cam Fowler and Brandon Gormley last year because of the interesting package of physicality, mobility, character and skill. Siemens has that but also potential offensive skills to add to that.

Siemens is a safe bet to become a physical defenseman in the NHL level. He has all the tools and he will be relied on back in Saskatoon in all situations. Perfect place to develop a defenseman.

Still, there will be many teams very interested in the entire package Siemens offers and won't be surprised to see him pick top 10.

Second pairing physical defenseman - can play in all situations

big, fiery and has some upside ... brings the lumber with his mobility and tough edge ... gap control is very good, and he plays a sound positional game ... powerful stride and good lateral agility ... can do it all including fight ... very poise ... has zeal and passion for the game ... offensive upside is a question ... does not have game-breaking element

Very physical and not afraid to drop the mitts ... a good skater, has some offensive tools, a good shot, good passer and is as tough as nails ... a great passer and has a very hard shot ... a strong and powerful skater ... very good in his own zone defensively and can put out some points on the board ... good shotblocking ability ... underrated offensive ability ... very mature on and off the ice ... the epitome of a team player ...  has a nasty streak ... handles the puck too often coming out of his own zone ... shot still needs some work to improve his timing and accuracy

an all around defenseman with nastiness ... outstanding package of size, skill, and skating ... loves to take the body ... has the size and strength that makes him an extremely difficult player to play against ... a very good skater for his size and has a good shot ... able to make the first pass out of his zone ... steady type of player that’s good in his own end ... decision-making (especially in his own end) is also a concern at times ...

The Wild have tons of depth defenseman. All are quite mobile, alot of have size (or bigger than Siemens). But none have the upside of Siemens.

Spurgeon, not sure if he counts as a prospect anymore. Scandella might have a similar offensive upside but Siemens just offers that extra physical push that would make him the second best prospect with the Wild (after Granlund).

Great prospect, interesting tools, but not what I want at #10.

I know theres all this talk of best prospect available, but #10, there will be a group of prospects that have similar levels of talent. If I were to be picking first in that group, I would want a prospect that meets some sort of organizational need. 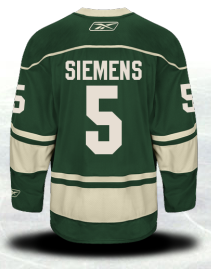