Was the consensus number one pick a few months ago, but now finds himself fighting to stay in the top 5.

I don't believe in the franchise hype Larsson was getting at the beginning of the season, but he still has a very good potential of being a top pairing defenseman.

The complete package, he is a very well rounded defenseman, with very good size. In addition, he has very good poise and very good hockey sense. While, in my opinion, he won't be a franchise player, he'll eat TONS of minutes on the blueline, and he'll be player that the coach can put out in any situation: 5-on-5, PP, PK, last 5 minutes, against top players etc.

Also, his downside doesn't seem too bad either. He can either become a top pairing defenseman, or if all goes to worst, he'll become a decent depth NHLer. With the size, poise and mobility, his chance of become an NHLer is very high.

The question is, do you spend your #1 overall pick on him or guys like Ryan Nugent-Hopkins and Jonathan Huberdeau who have very dynamic side to their games?

the complete package ... a powerful skater who is smooth with his stride and footwork ... has very good hands and vision ... has a booming shot ... plays a smart positional game ... can run the power play effectively ... a mature, poised, confident kid ... Larsson was not a dominating player, but that's not really his game

"Adam is one of the best skater’s in this year’s draft -- he has excellent speed and mobility. He also has patient puck handling abilities and can surprise an opponent with a solid hit. His size and skating ability make him comparable with Tampa Bay Lightning defenseman Victor Hedman."

He’s a composed defender with solid skills at both ends of the ice ... an imposing figure with tremendous size ... size, puck moving ability, and solid positional play are all there ... very calm with the puck ... has great poise and vision ... very capable offensively ... skating is likely the primary concern if you’re looking for one

We may have alot of defensemen in the system, and alot of them with size, but Larsson is just someone you WANT to have in your organization.

It will make our deep defensive core deep AND talented.

He's too good to pass on. 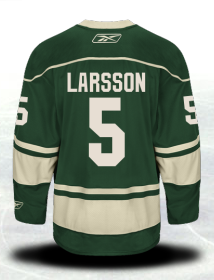