If there was one prospect that could really be drafted earlier than expected, it would be Joe Morrow.

He's got a good frame, a solid-all round defenseman and also has very good puck moving skills. In addition, he's got a great shot and skates very well. He just seems to have a great well-rounded package that teams would love to get.

The only things he would need to work on is getting his shot off quicker and rounding off his game in his own zone, but none of these things would be considered major flaws to his game.

Now, he just has to continue developing all aspects of his game if he wants to become a top pairing defenseman in the NHL

One of the better puck movers in this draft ... a pretty strong all-around package ... a smooth skater with a long, fluid stride ... has a big booming shot ... sees the ice well and has a real steady touch with the puck ... is a very good passer ... loves to rush the puck ... got an edge to him as well ... needs to work on the mechanics of his shot

The Wild would love to get a puck-moving defenseman in their system. Marco Scandella and Clayton Stoner are primarily defensive d-men and Jared Spurgeon is missing the size that Morrow has.

Now, I know I said he might get picked earlier than expected, but I don't think as early as #10.

I would prefer to find the Wild give their jersey to a forward on draft day. 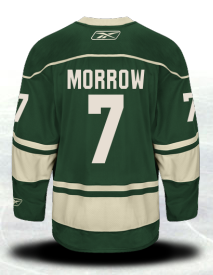