With the 10th pick in the SBN NHL Mock Draft, Hockey Wilderness and the Minnesota Wild select Mika Zibanejad. Last season the good folks at Hockey Wilderness selected Mikael Granlund and have been proven to be geniuses. Will we be right two years in a row? Will Zibanejad fall to the Wild at 10? Can the Minnesota fans learn to pronounce Zibanejad? Does anyone else look at his name and think of this Mika? No? Just me? Nevermind.

For insight into Zibanejad (we're not sure whether to call him Zibs or Ziba, so we'll leave that to you), we now hand you off to Dan Chan, our expert of all things "prospect-y".

Dan, take it away:

Probably one of my favorites of becoming a Wild prospect, Mika Zibanejad has the entire toolset of a potential powerforward.

Zibanejad has decent speed, good offensive skills, understands that his role requires him to be physical and knows how to get into the right spots to get that rebond, screen the goalie or go for the deflection. In addition, he has the ability to play wing.

I love the fact that Zibanejad fully understands his role as a powerforward and has become very accomplished at it. He may not be as flashy as prospects like Ryan Strome or Jonathan Huberdeau, but Zibanejad plays with tons of fire and knows that hits and battles along the boards wins pucks. He knows he has a good frame to give the hit and to screen the goalie. His understanding of the game and his role will make him a very successful NHL player, in any role.

"Mika's a real power forward but also has soft hands, good vision and fine skating skills. He has tremendous balance and is hard to knock off the puck. He's very strong in the battles along the boards, finishes checks with authority and has a heavy shot that he gets off quickly. Mika's a competitive player who is willing to pay the price to score a goal. He does have a very good understanding of his defensive duties."

power forward ... outstanding pivot with size, skating, sense, shot and spirit ... has a fluid stride ... excellent puckhandler who sees the ice well ... slick passer/playmaker as well ... knows how to find the soft areas of the offensive zone ... goes hard to the net ... good, solid defensive awareness ... he's a banger and relishes physical contact ... plays with some fire and competitiveness ... has some real swagger and personality ... versatility is also a bonus for Zibanejad ... initial quickness and first step need to improve along with agility and footwork ... must learn to keep his emotions in check at times ...

Zibanejad is the biggest riser in the final rankings this year; something that doesn’t come as much of a surprise given our placement of him in the mid-term edition. The versatile Swede has a big body and plays both ends of the ice equally well. Skates well and can cover a lot of ice from the center position while being strong in the face-off circle. Might not have the highest offensive ceiling out of some of the players in the Top 10-15, but still has first line potential and could still be a great second line center if his offensive upside isn’t there.

He may not be that dynamic winger we all want but he CAN score. He can also set up goals, give the hits, win the puck battles and screen the goalie.

He'll be able to do everything, and with his competitiveness and his good sized frame, he'll become a very good NHLer.

Yes! We finally do a post on a prospect I think could wear the Wild jersey. 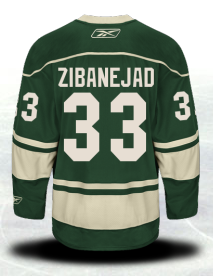