When ranking prospects, one of my top priorities is hockey smarts. The ability to read plays under stress and make the right decisions in a split second. Jonas Brodin is one of the smartest defensive prospects in the draft and which is why I think he'll become a good player.

The lanky defender plays with tons of poise and is very smart on the ice. Very mobile and very agile, Brodin can skate and command the transition game from his own zone.

However, the main concern is how good will he become. While he is very smart and very solid all-round, there are questions of his offensive and physical upside.

His strength is his ability to move the puck up the ice but without any dominant offensive abilities, some wonder whether he will be a great, or just a good defenseman at the the NHL level. In addition, he plays a smart and safe defensive game without much physical play.

But for me, I guess watching Nick Schultz and Jared Spurgeon become good NHLers without the need of dominant physical attributes, I am confident that Brodin can become a useful member for which ever team selects him.

a mobile skater who plays a smooth game in transition ... highly mobile and agile with excellent footwork ... very solid all-around game and intelligence ... poise and vision to make plays all over the ice ... his hockey sense is tremendous ... can diagram a play instantly and move the puck with authority ... think many steps ahead of everyone else like a chess grandmaster ... extremely light and needing to add strength and mass ... not seeing the dynamic upside with him

very smooth-skating defenseman with great agility ... a puck mover ... a very steady, smart player that’s not a real big guy, but he’s skilled and smart ... was able to play a significant role at the elite level ... has good ability and a good talent level in all the areas you would need to produce offensively ... unsure of his ultimate offensive upside ... unwillingness to play a more physical style

Brodin is a lanky defender that skates extremely well and has great lateral ability across the ice ... strong skater, good lateral ability and can buy himself the time he needs to find a passing lane ... makes good decisions with the puck and uses outlets well ... has shown strong consistency ... good defensive skills and very methodical in positioning himself ... lack of a dominant quality ... doesn’t quite have the physical upside ... inconsistent offensive ability

Again, the Wild lack top level talent in the organization and adding Brodin will help mend that. He isn't exactly the Wild need but he's a good prospect that the team wouldn't mind adding.

No. He is a personal favorite of mine to succeed but not for the Wild.

He is a prospect very similar to many of the Wild prospects in that he plays a quiet but solid game. At #10, I feel we can grab a prospect that can give us a bluechip player as well as fill in our offensive need. Brodin isn't that player 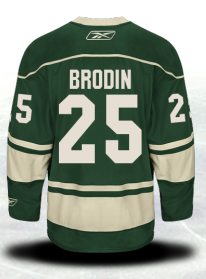