Originally thought to be a top five pick this year, Brandon Saad's stock has dropped quite a bit.

Saad is blessed with physical talents but doesn't use them to the fullest. He is a good 6-1, 208lbs but shies away from physical contact.

However, he still is a very good skater with the ability to move into open areas. He also has good hands and has a well-rounded offensive package.

But for me, I am skeptical about a prospect who doesn't use the attributes he has been blessed with: speed and a big body. However, if he improves his consistency using his large frame, he could very well become a very good player.

"Brandon has very good speed and agility and that makes him dangerous, he’s solid on his skates and fights through checks very well. He plays a solid two-way game and is very responsible defensively."

"Saad has very good size and top-two line skills. While he wasn’t as good as expected this year, he still put up solid offensive numbers. He has a very hard shot and quick release. He improved his two-way game and became a more complete player this year. He has very good upside."

"Suffice to say, TSR’s thoughts on Saad have plummeted as the 2010/2011 season progressed. We had very high expectations for Saad this year; his first in the OHL, but have never seen the type of game that warrants the pre-season hype. Saad is a big winger with good speed, a hard shot, and a fairly good head for the game, but he lacks the drive you need to be a top line player at the next level. Saad shies away from contact despite being a big player and never really uses his body to his advantage. He doesn’t drive the front of the net enough and just isn’t willing to pay the price. All is not lost with Saad, as he does have goal scoring talent, but he needs to show a lot more if he wants to have that opportunity in the NHL."

Saad does have skill, speed and size, and all that is very nice. The Wild could use an impressive package like that, even in the near future when Mikael Granlund comes over.

As you can tell from the above paragraph, I am not a big fan of Saad.

He has an interesting toolset but the fact that he doesn't make the most out of them makes me question how he will develop at the pro level. 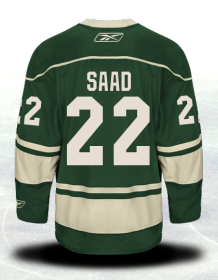