Now here's an interesting gamble. Dmitri Jaskin has all the tools to be a powerforward, but lacks the one thing that NHL teams take high in regard: skating.

He's a bull on the puck, has good offensive skills and works hard. He can drive to the net, protect the puck and win battles along the boards. Sounds promising.

But in this current NHL, skating is seen as one of the important, if not THE most important, attribute that players must have. It's not to say Jaskin's skating is down right awful, but it is considered average and his first steps a bit heavy and awkward.

But with the proper coaching, he can probably make a good impact with whichever team picks him. I mean, we've seen what Andrew Brunette and Owen Nolan can do with below average skating...

Has everything you want in a power forward ... is a complete package ... is strong on his skates and is able to get where he needs to be ... bulls his way to the dirty areas of the ice ... goes hard to the net ... can really rip it, with a rapid release, heavy shot and good accuracy ... tough to separate off the puck down low ... excellent puck puck control in tight space ... very creative with the puck ... very solid defensively ... poise and hockey sense ... strong competitor, plays with heart and character ... skating is a certain drawback, as he lacks smooth stride and looks awkward at times

he is a talented winger who can play with a bit of jam ... a well rounded player ... pretty good with the puck and makes good decisions as well ... skating is a bit of an issue, and he’ll need to work on improving his stride

The Wild not only lacks skill, they also lack physicality (if that is even a word...)

Besides Colton Gillies, no one has the tough game Jaskin can bring. Not only does he bring a tough game, he brings a skilled game. The Wild could surely use a guy that can drive his way to the net (and perhaps have Granlund feed him the puck following that)

He sounds great and I'm think he can possibly overcome his skating flaws, but at #10, I am not comfortable.

I'm a safe person so when it comes to the draft, I would want to see the Wild select someone that has considered less of a gamble. 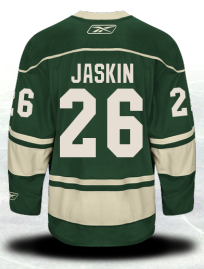