Rattie is one of the better playmakers in this years draft. An offensive dynamo that has the ability to be very elusive and shifty.

Just what the doctor ordered.

But his lack of size (only 5-11 163lbs) is a concern. He doesn't have that quickness either some teams like to see in smaller players. For comparison sake, Minnesota Wild's Mikael Granlund is 5-10 and a bigger 180lbs, and we all know his size is a concern. However, it has been commented that he has improved alot this season and that is what many teams like to see when drafting prospects in the first round.

In addition, it wasn't very good news that he was cut from Canada's U-18 Team

Rattie has the vision, the elusive skating and all the offensive tools to become a danger in the future, and in a draft this deep, it wouldn't be a surprise to see a team take him earlier on based on his offensive upside.

creative, dynamic playmaking winger ... has a knack for scoring huge, clutch goals ... very strong on his skates and highly elusive ... this season, Rattie was much more patient, working with his linemates better and not trying to do it all himself ...  plays with a bit of an edge and does his share of agitating ... shows a willingness to hustle and backcheck ... has come a considerable distance in a short amount of time ... does not have size and blinding speed ... his defense is still improving ... the size and lack of strength is a problem for him when he goes into heavy traffic or tries to take the puck to the net

has an excellent shot and ta quick release ... an above average skater ... sees the play extremely well ... very skilled at creating quality chances in the offensive zone ... shows awe-inspiring playmaking capabilities ... also has the scoring touch to finish off those opportunities ... able to use his speed effectively to drive wide and draw in defenders ...  not the most complete two-way player ...  needs to become a more explosive skater for his size ...  he needs to get stronger ... he tends to disappear at times and plays primarily on the perimeter

very quick with a great first step ... solid both ways ... not afraid to get a bit dirty ... a very very good playmaker, might be one of the best passers in this draft class ... solid hands and a deceptive wrister ... not the biggest guy

One of the Wild's biggest weaknesses is on the right wing. There is a lack of offensive talent on the right side and Rattie could just be the prospect to help fix that.

However, as talented as he is, I do not like the boom/bust risk factor with Rattie. At #10, I feel there are better options than him. 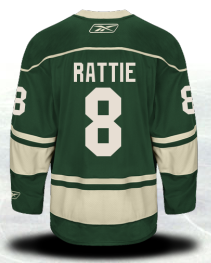