Oscar Klefbom might be the surprise pick of the 2011 NHL Entry Draft.

Currently ranked 6th by Central Scouting and with an HW Ranking of 18.4 (see the explanation above on what an HW Ranking is), Klefbom initially doesn't jump off as a potential top 15 pick. But when you look at the tools he has and what he could potentially give a team in terms of impact, you start to understand why he might find himself picked earlier than expect.

A very good skater with great size (6-3" 200lbs) and with the fire in his game to play physical, Klefbom game should translate well from Europe to North America. In addition to his size and physical play, he has the ability to rush the puck up the ice and also has a hard shot.

While he does have to continue refining his game and to learn how to simplify his game, he has size, mobility and offensive potential to make any of the top 15 teams taking a long look at Klefbom.

a very mobile player ... has the strength to fight through checks with his combination of speed and power ... a capable puck mover ... has a decent shot that he uses frequently ... competes hard and can make life difficult for opposing forwards with his tenacity and willingness to engage physically ... a natural leader ... lacks a bit of the high-end creativity you might want from your powerplay quarterback

"Worst-case scenario, he’s a big, strong guy who can play against the other team’s top players," said MacDonald. "He’s a big, strong man - the kind that every team covets.""When he achieves his potential, he should be a big, solid, two-way defenseman who can play in your top four for a lot of years."

Aggressive, dynamic puck rusher loves to take the puck up ice ... very good skater ... has a long stride and is strong on his skates ... heavy booming slap shot with good release ... possesses a hard wrister that he uses effectively ... loves to shoot the puck from just about anywhere on the ice ... good bodychecker ... passionate, exuberant player ... a captain and winner ... attacking style lands him in trouble when he pinches at wrong times ... undisciplined ... will sometimes run around and try to do too much

He fits as the top defensive prospect for the Minnesota Wild. He has a good combination of skills that will make him a very popular pick.

The Wild have a ton of defensive defensemen but almost no offensive d-men. Klefbom will become the highlight of that group.

I rather see a few other prospects selected but if Klefbom was picked at #10, I fully understand why. He is a very interesting project and the impact he can potentially give the Wild is great. 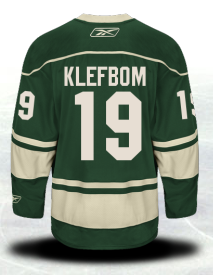